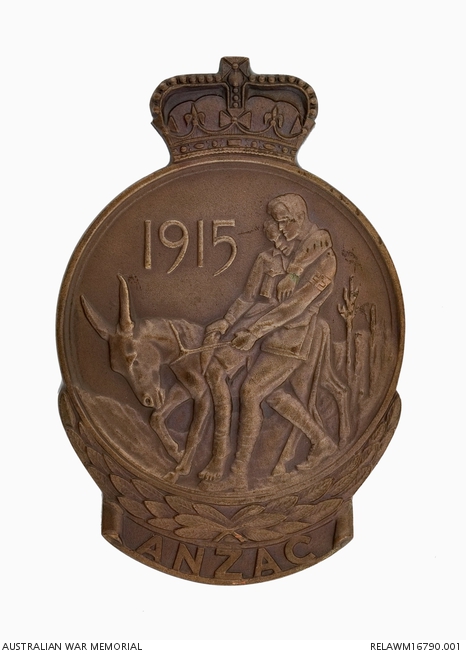 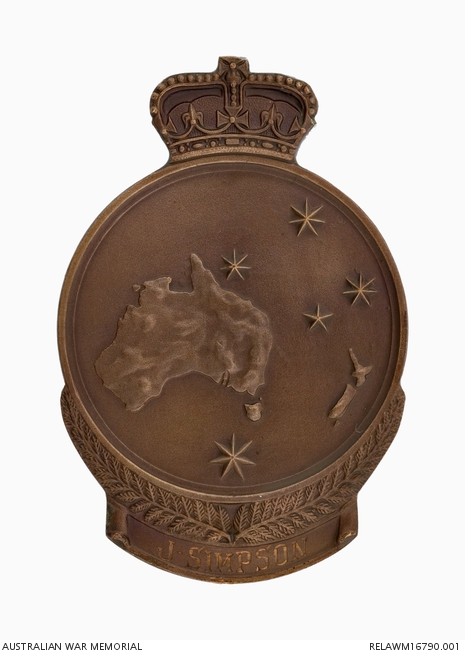 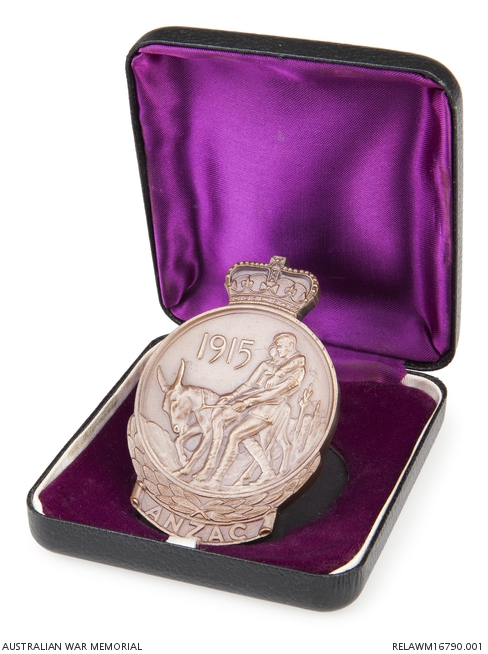 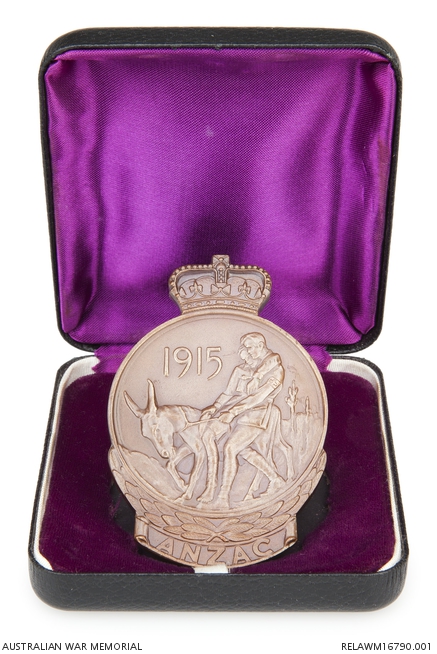 Circular bronze medallion surmounted by the Queen's crown. Obverse shows Simpson and his donkey assisting a wounded man, a laurel wreath, the date '1915' and the word 'ANZAC'. Reverse shows a map of Australia and New Zealand with the Southern Cross superimposed over it, fern fronds and the engraved name of the recipient 'J. SIMPSON'.

This Anzac Medallion was issued by the Australian government in 1967 to commemorate the 1965 50th anniversary of the Gallipoli landings. The medallion was issued to surviving veterans or their next of kin, and was designed by Australian sculptor Raymond Ewers. This particular medallion, bearing the name 'J. SIMPSON' (actually John 'Jack' Simpson Kirkpatrick) the famous 'man with the donkey', was issued to his sister, Annie Simpson Pearson, who donated it to the Australian War Memorial.

John 'Jack' Simpson Kirkpatrick was born in July 1892 in South Shields, at the mouth of the River Tyne in north eastern England. As a young man he joined the merchant navy, but deserted his ship in Australia in May 1910. For the next year, he held a variety of labouring jobs in Queensland and NSW, before finding work on coastal steamers which occupied him until the outbreak of war.
Kirkpatrick enlisted in the AIF at Perth, Western Australia, but fearing that his history as a deserter might count against him, dropped his surname, becoming 202 Private John Simpson in 3 Field Ambulance. This unit was among the first to land at Gallipoli on 25 April 1915, and by the 26th, Kirkpatrick had struck on the idea of using a donkey to help wounded men from the high ground of the front line back to the dressing stations near Anzac Cove. Absenting himself from his unit, and known variously to the men of Anzac as 'Scotty' or 'Murphy' because of his thick Tyneside accent, he performed this dangerous task, often exposed to the fire of Turkish machine guns, snipers and artillery, until May 19, when he was killed by machine gun fire in Monash Valley. He was buried at Beach Cemetery.

Colonel (later General Sir John) Monash, commanding 4 Australian Infantry Brigade, wrote at the time: 'This man has been working in this valley since 26th April, in collecting wounded, and carrying them to the dressing stations. He had a small donkey which he used, to carry all cases unable to walk. Private Simpson and his little beast earned the admiration of everyone at the upper end of the valley. They worked all day and night throughout the whole period since the landing, and help rendered to the wounded was invaluable. Simpson knew no fear and moved unconcernedly amid shrapnel and rifle fire, steadily carrying out his self-imposed task day by day, and he frequently earned the applause of the personnel for his many fearless rescues of wounded men from areas subject to rifle and shrapnel fire.'