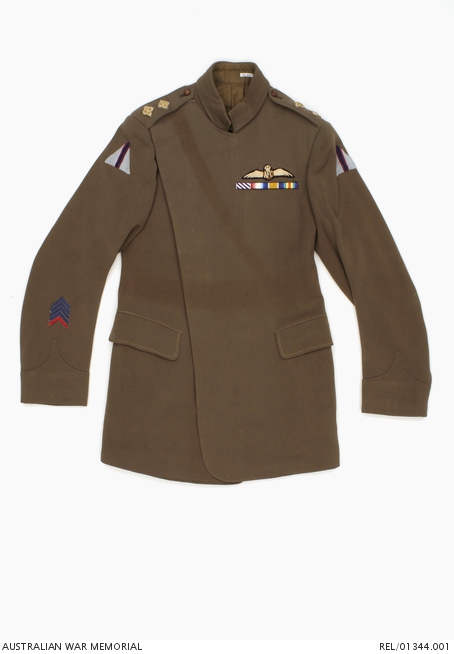 Australian Flying Corps officers private purchase khaki wool gabardine flying jacket, popularly known as a 'maternity' jacket, with rank insignia of lieutenant. The embroidered rank stars on the epaulettes are padded and are of two different patterns. The brown leather used for the buttons on the epaulettes has been pressed to imitate plaited leather.

The collar tabs of the stand and fall collar are secured tightly, so the collar almost looks like a stand collar when the front is secured. The overlapped front panel of the jacket is secured on the right side with concealed thin plastic buttons. There is a pocket let into both of the front panels of the jacket below the waistline. The pocket flap is plain, and slopes slightly downward towards the front of the jacket. An AFC pilot's silk embroidered brevet has been sewn onto the right breast. Below this is a ribbon bar representing the award of the Distinguished Flying Cross, 1914-15 Star, British War Medal 1914-20, and Victory Medal.

On both sleeve shoulders is the triangular pale blue, dark blue, and red colour patch of the AFC. On the right sleeve above the point of the cuff is one red and four blue overseas service chevrons. The jacket is lined with cotton twill fabric. The lining of the body is khaki and the sleeves are cream with printed black stripes.

In early July 1917 he applied for a transfer to the Royal Flying Corps (RFC) and was assigned to 67 Squadron (later 1 Squadron, Australian Flying Corps), and qualified as a gunner/observer by October 1917. Fysh's application for pilot training was accepted, but the war ended before his graduation at Heliopolis, Egypt, in February 1919.

Flying Officer Fysh was recommended for the Distinguished Flying Cross on 8 January 1919. His citation reads 'For gallantry in air combat and in attacking ground objectives. On 31 August 1918 this officer, acting as Observer to Lieutenant McGuiness, DCM, attacked and destroyed two hostile two-seater aeroplanes ... On previous occasions (23rd June and 3rd August 1918) this Officer has engaged in combats, resulting in the destruction of enemy aircraft as well as forcing enemy machines to land ... He has always shewn great skill and gallantry on these and other occasions.'