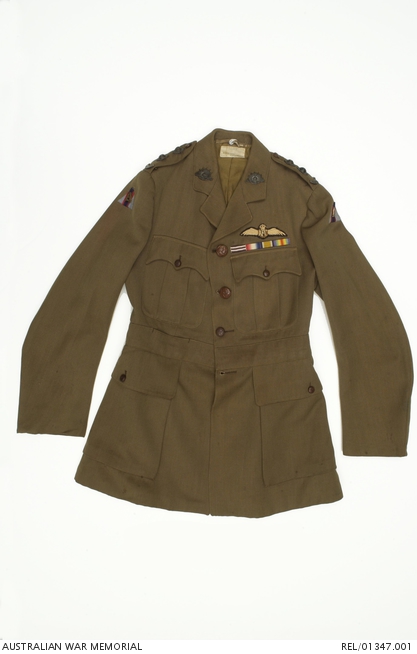 Australian Flying Corps (AFC) officers khaki wool gabardine service dress tunic with open collar. The lieutenant's rank stars, curved 'AUSTRALIA' shoulder titles, and general service collar badges are oxidised brass. A small fabric tab is buttoned under the right lapel and there is a corresponding button on the left lapel, enabling the wearer to wear the collar upturned for warmth. The pair of patch pockets on the breast are box-pleated and the bottom edge of their flap is scalloped. Above the left breast pocket is a detachable ribbon bar for Distinguished Flying Cross (first pattern ribbon with horizontal stripes, before 1919), 1914-15 Star, British War Medal 1914-20, and Victory Medal. Above the ribbon bar is an AFC pilots silk embroidered brevet (wings) that is sewn on crookedly. There is a concealed pocket that has a slit opening in the top of the self-fabric waistband on the front right side. On both sides of the waistband there is a brass belt hook. The pair of patch pockets below the waistband are plain and the bottom edge of their flap is very slightly curved. The brown leather used for all of the various sizes of buttons that are fitted to the tunic has been impressed to imitate plaited leather. The bottom button is missing except for its backing plate. Sewn onto both sleeve shoulders are crude, unofficially supplied, triangular blue, dark blue, and red colour patches worn by AFC units. Large brass Anzac 'A's are fitted to both colour patches. Stitching remnants near the right cuff indicate that an overseas service chevron was fitted but has been removed. A white cotton label that is sewn inside the back of the collar is printed with the maker's name. THEXTON & WRIGHT LTD/ LONDON W and 'No.8140 / Size 3 / Breast 38 / Height 5ft.9in.&10in.'. The body of the tunic is lined with khaki cotton sateen and the sleeves with cream plain weave cotton. A hanging loop is stitched above the maker's label. A pocket with a slit opening has been let into the lining of the left breast. It has a small button-holed brown leather tab above it. There is a single rear vent to the waistband.

Worn by Lieutenant Wilmot Hudson Fysh. Fysh was born in Launceston, Tasmania, in 1895, and enlisted as Trooper 415 in 3 Australian Light Horse Regiment on 21 August 1914. After service at Gallipoli and in Palestine, he was commissioned in 1916 in 1 Light Horse Machine Gun Squadron, but later transferred to the Australian Flying Corps. He served as an observer with 1 Squadron, and was awarded the Distinguished Flying Cross in 1918. His application for pilot training was accepted, but the war ended before his graduation at Heliopolis, Egypt, in February 1919. After returning to Australia in March 1919, Fysh was employed to survey the Longreach to Darwin leg of the proposed air route from England to Australia. This knowledge assisted him when, in 1920, he helped to found the Queensland and Northern Territory Aerial Services Ltd (QANTAS). By 1923 he was both managing director and chief pilot of the airline, which he led until his retirement in 1955. Hudson Fysh was knighted (KBE) in 1953, and died in Sydney in 1974.

1 squadron of the Australian Flying Corps (AFC) was formed at Point Cook in Victoria in January 1916. It sailed from Melbourne on 16 March, and arrived in Egypt on 14 April. Upon joining the British forces in Egypt, the squadron became known as 67 (Australian) Squadron, Royal Flying Corps (RFC), and would not revert to its original name until 19 January 1918.The squadron began flying operations in its own right on 12 June 1916, with aerial reconnaissance as the squadron's main role. Its aircraft operated both out across the Sinai desert in search of Turkish forces, and across Egypt's western desert to monitor activity by the rebellious Senussi. In December 1916, the squadron supported the British and dominion advance into Palestine. It became a 'jack of all trades' carrying out reconnaissance, photography, ground attack and liaison missions, in addition to having to fight off aggressive German adversaries. New aircraft allowed them to range over Turkish territory with virtual impunity and airpower contributed greatly to the success of British and dominion operations in 1918, particularly the last great offensive of the campaign, launched with the Battle of Megiddo on 19 September 1918. The Turkish forces surrendered on 31 October. 1 Squadron returned to Egypt in February 1919, embarked for home on 5 March, and was disbanded upon its arrival in Australia.