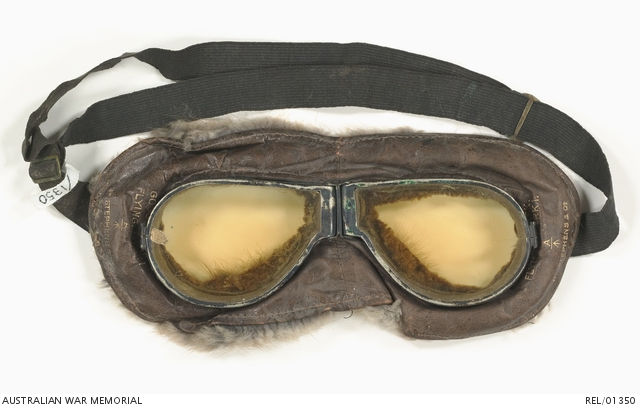 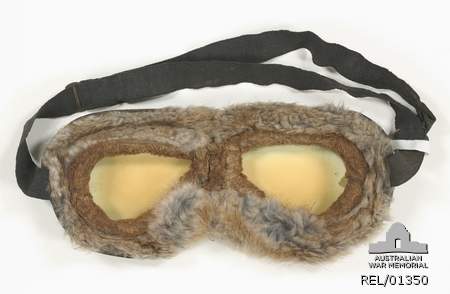 Pair of aluminium-framed flying goggles, hinged in the centre, lined with cotton tape to which a leather outer and rabbit fur lining is sewn. The leather extends in the centre to form a nose guard. There is a black elastic head strap with pair of brass adjustment buckles at each end. The leather outer is stamped in gold 'GOGGLE MASK / FLYING, MARK 1. / A^ / WM STEPHENS & CO.' at each end. The Goggles fitted with yellowed Triplex safety glass. The right hand lens has a small 'TRIPLEX' sticker attached to outer face.

Sir Wilmot Hudson Fysh was born in Launceston, Tasmania on 7 January 1895. He was educated at Launceston Grammar School and Geelong Church of England Grammar School. Fysh had already served as a cadet with the 70th Infantry Militia and had volunteered with the Tasmanian 26th Light Horse when war was declared. He enlisted on 25 August 1914 with 3 Light Horse Regiment (3LHR), as did most of Tasmania's Mounted Infantry, at the training camp at Pontville, Tasmania. 415 Trooper Fysh embarked from Hobart aboard HMAT Geelong on 20 October 1914, trained in Egypt and served at Gallipoli from May 1915 until the evacuation. He served in Sinai and Palestine with 'C' Squadron, 3LHR, until 17 July 1916, when he transferred to 1 Light Horse Brigade Machine Gun Squadron where he was soon promoted to corporal, and, by January 1917, to lieutenant. In early July 1917 he applied for a transfer to the Royal Flying Corps (RFC) and was assigned to 67 Squadron (later 1 Squadron Australian Flying Corps), and had qualified as a gunner/observer by October 1917. Flying Officer Fysh was recommended for the Distinguished Flying Cross on 8 January 1919. His citation reads 'For gallantry in air combat and in attacking ground objectives. On 31 August 1918 this officer, acting as Observer to Lieutenant McGuiness, DCM, attacked and destroyed two hostile two-seater aeroplanes ... On previous occasions (23rd June and 3rd August 1918) this Officer has engaged in combats, resulting in the destruction of enemy aircraft as well as forcing enemy machines to land ... He has always shewn great skill and gallantry on these and other occasions.' Fysh's application for pilot training was accepted, but the war ended before his graduation at Heliopolis, Egypt, in February 1919. After returning to Australia in March 1919, Fysh was employed to survey the Longreach to Darwin leg of the proposed air route from England to Australia. This knowledge assisted him when, in 1920, he helped to found the Queensland and Northern Territory Aerial Services Ltd (QANTAS). By 1923 he was both managing director and chief pilot of the airline, which he led until his retirement in 1955. Hudson Fysh was knighted in 1953, and died in Sydney in 1974.