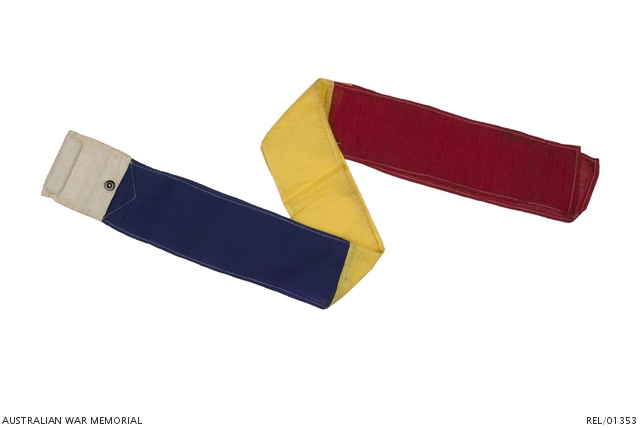 Aircraft message streamer, with linen message pouch on one end. The pouch is fastened shut with a single black celluloid button and is double stitched around the open edges. There are two streamers fastened at one end to the pouch. The streamers are hemmed around the sides with white cotton and they are divided evenly into three sections: blue, red and yellow.

The lack of ground to air communication in WWI saw all sides use messages dropped from aircraft. The message bags to which the streamer was attached would have the message inserted and the whole dropped over the relevant unit or position. The streamer was long and colourful to enable it to be seen and recovered.

In early July 1917 he applied for a transfer to the Royal Flying Corps (RFC) and was assigned to 67 Squadron (later 1 Squadron, Australian Flying Corps), and qualified as a gunner/observer by October 1917. Fysh's application for pilot training was accepted, but the war ended before his graduation at Heliopolis, Egypt, in February 1919. Flying Officer Fysh was recommended for the Distinguished Flying Cross on 8 January 1919.