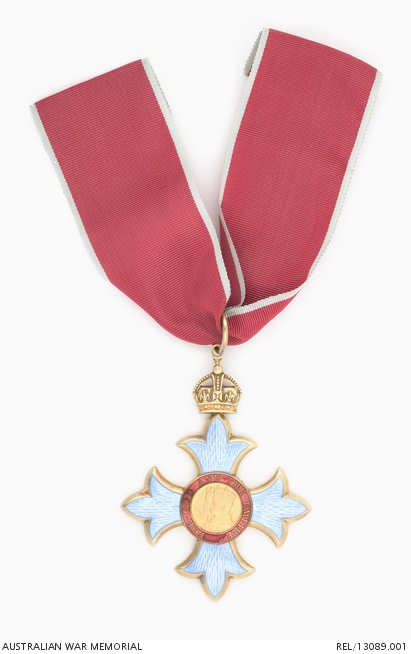 Neck Badge, Knight Commander of the Order of the British Empire (civil).

Associated with the service of Sir Wilmot Hudson Fysh. Fysh was born in Launceston, Tasmania, in 1895, and enlisted as Trooper 415 in 3 Australian Light Horse Regiment on 21 August 1914. After service at Gallipoli and Palestine, he was commissioned in 1916 in 1 Light Horse Machine Gun Squadron, but later transferred to the Australian Flying Corps, serving as an observer with 1 Squadron. 1 Squadron operated both across the Sinai desert in search of Turkish forces and across Egypt's western desert to monitor activity by the rebellious Senussi. The squadron also supported the British and dominion advance into Palestine. Fysh was awarded the Distinguished Flying Cross in August 1918 for 'gallantry in air combats and in attacking ground objectives'. His application for pilot training was accepted, but the war ended before his graduation at Heliopolis, Egypt, in February 1919. After returning to Australia in March 1919, Fysh was employed to survey the Longreach to Darwin leg of the proposed air route from England to Australia. This knowledge assisted him when, in 1920, he helped to found the Queensland and Northern Territory Aerial Services Ltd (QANTAS). By 1923 he was both managing director and chief pilot of the airline, which he led until his retirement in 1955. Hudson Fysh was knighted (KBE) in 1953, and died in Sydney in 1974.