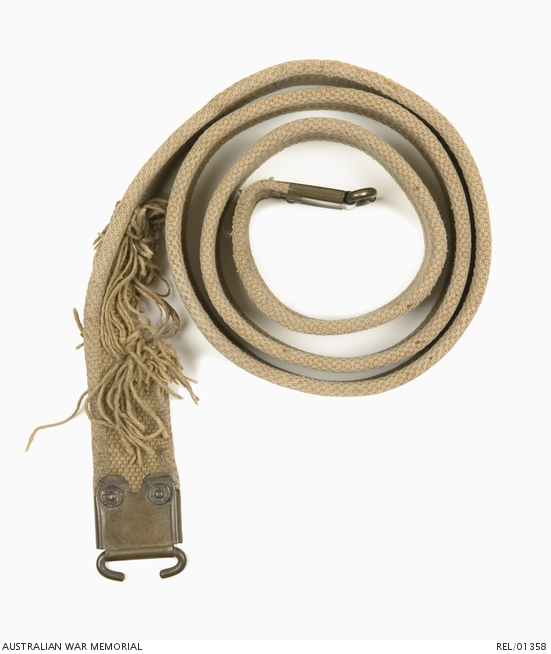 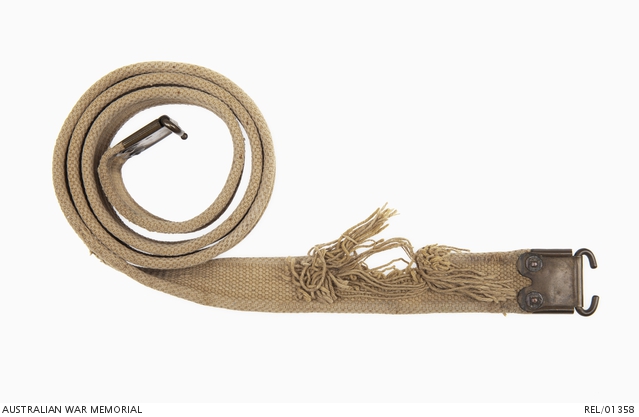 Sir Wilmot Hudson Fysh was born in Launceston, Tasmania on 7 January 1895. He was educated at Launceston Grammar School and Geelong Church of England Grammar School. Fysh had already served as a cadet with the 70th (Ballarat) Infantry Militia and had volunteered for a year with the Tasmanian 26th Light Horse when war was declared. He enlisted in the AIF on 25 August 1914 with 3 Light Horse Regiment (3LHR), as did most of Tasmania's Mounted Infantry, at the training camp at Pontville, Tasmania. 415 Trooper Fysh embarked from Hobart aboard HMAT Geelong on 20 October 1914, trained in Egypt and served at Gallipoli from 9 May 1915.

Of this damaged rifle sling, Fysh notes in his book 'Qantas Rising' (pp 31-2):

"I remember visiting our forward field ambulance dressing station with blood streaming from a cut over my eye caused by a bullet splinter off the parapet. All I got was a strip of sticking plaster and back into the line.

"Then there again was that ominous fizzing and right near my feet. None of us had seen the bomb come over. How long had it been there? Anyhow, I made a wild dive around the trench embrasure, just as the thing went off, a large fragment going through my water bottle which stopped it. Other fragments had marked my rifle. A lucky escape.

"When I later got my commission, parting with that rifle was a hard thing, for the scarred weapon caused much interest. I remember an inspection by General Chauvel in Egypt after the evacuation. Noticing the rifle, the general stopped in front of me and I was, of course asked for the story.”

After the evacuation, Fysh served in Sinai and Palestine with 'C' Squadron, 3LHR, until 17 July 1916, when he transferred to 1 Light Horse Brigade Machine Gun Squadron where he was soon promoted to corporal, and, by January 1917, to lieutenant. Required to exhange his rifle for a pistol, Fysh kept the damaged rifle sling as a souvenir of his service on Gallipoli. In early July 1917 he applied for a transfer to the Royal Flying Corps (RFC) and was assigned to 67 Squadron (later 1 Squadron Australian Flying Corps), and had qualified as a gunner/observer by October 1917.

Flying Officer Fysh was recommended for the Distinguished Flying Cross on 8 January 1919. His citation reads 'For gallantry in air combat and in attacking ground objectives. On 31 August 1918 this officer, acting as Observer to Lieutenant McGuiness, DCM, attacked and destroyed two hostile two-seater aeroplanes ... On previous occasions (23rd June and 3rd August 1918) this Officer has engaged in combats, resulting in the destruction of enemy aircraft as well as forcing enemy machines to land ... He has always shewn great skill and gallantry on these and other occasions.' Fysh's application for pilot training was accepted, but the war ended before his graduation at Heliopolis, Egypt, in February 1919.