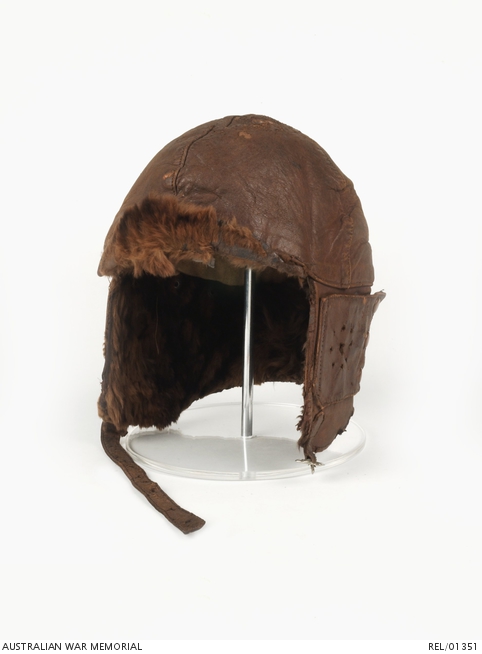 Brown leather flying helmet with buckle chinstrap. The helmet has leather flaps at each ear, stitched down at the front edge, and retained at the rear with brown metal press studs. Each flap has a circular pattern of small holes punched in it, and covers a larger (2 cm) reinforced hole in the helmet, over the wearer's ear. The crown of the helmet is lined with a fawn coloured fabric, while the lower section, covering the ears and upper neck, is lined with brown fur. A small turn-up peak above the eyes is lined with a similar fur.

Worn by Lieutenant Wilmot Hudson Fysh while serving with 1 Squadron, Australian Flying Corps. Fysh was born in Launceston, Tasmania, in 1895, and enlisted as Trooper 415 in 3 Australian Light Horse Regiment on 21 August 1914. After service at Gallipoli and in Palestine, he was commissioned in 1916 in 1 Light Horse Machine Gun Squadron, but later transferred to the Australian Flying Corps. He served as an observer with 1 Squadron, and was awarded the Distinguished Flying Cross in 1918. His application for pilot training was accepted, but the war ended before his graduation at Heliopolis, Egypt, in February 1919. After returning to Australia in March 1919, Fysh was employed to survey the Longreach to Darwin leg of the proposed air route from England to Australia. This knowledge assisted him when, in 1920, he helped to found the Queensland and Northern Territory Aerial Services Ltd (QANTAS). By 1923 he was both managing director and chief pilot of the airline, which he led until his retirement in 1955. Hudson Fysh was knighted (KBE) in 1953, and died in Sydney in 1974.