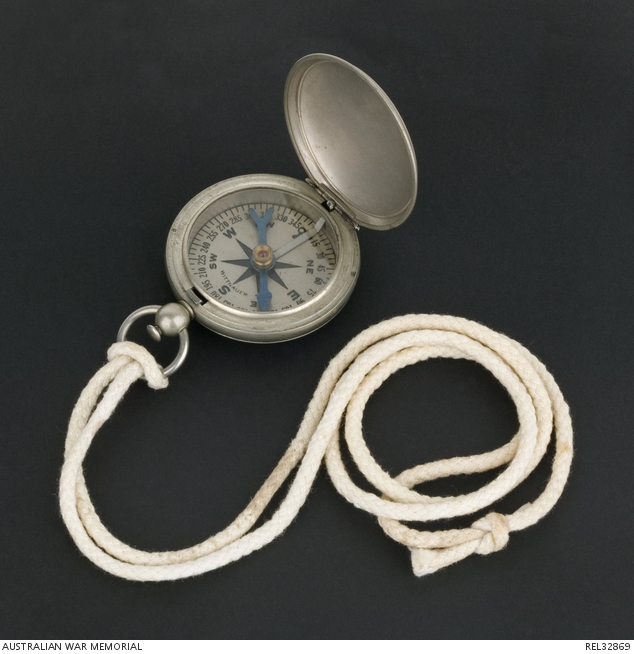 United States Army Air Force issued pocket watch style compass with a white cotton cord lanyard attached. Stamped into the flip top cover is 'U.S.A'. The blued compass point magnetic needle is centrally mounted on a ruby jewelled bearing. Beneath the bearing is a black eight pointed star. The face of the compass is natural metal with non-luminous black graduations every 5 degrees between each cardinal point. The compass point is automatically stopped and locked into position when the compass cover is closed.

This object is associated with the service of Sergeant William Henry Harris of 24 Squadron Royal Australian Air Force (RAAF). William Henry Harris was born on 16 July 1921 in Gawler South Australia. He was living at Broken Hill, New South Wales when he enlisted into the RAAF on 3 July 1940 and was allocated the service number 28117. He was discharged from the RAAF on 26 February 1946 with the rank of sergeant. 24 Squadron at this time were operating the massive US built Consolidated B-24 Liberator heavy bomber. These US made compasses were frequently carried as part of a survival kit for American aviators of the Second World War. With the close interaction between the United States Army Air Force (USAAF) and the Royal Australian Air Force (RAAF) as part of the 5th Air Force from 1942 to 1945 it was common for Australian and American aircrew to swap or purchase items from each other.