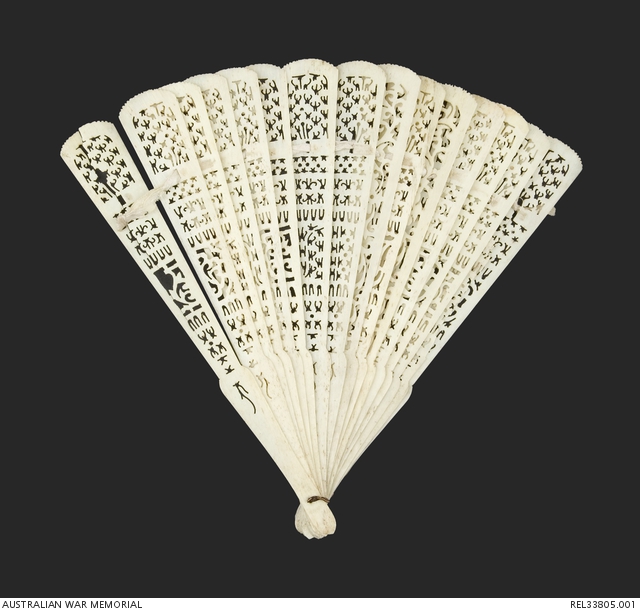 The blades of the fan are made of bone, intricately carved with Chinese designs, and joined at the bottom by a twisted length of copper wire (probably not original). Most of the blades have a slot located approximately 45 mm from the top, which accommodates a white satin ribbon. Two fan blades which lack this slot also have markedly different designs to the others, suggesting that they either were originally the front and back faces, or that they were not originally part of this fan. It is likely that a number of additional blades are missing.

Souvenir fan obtained by Able Seaman Signaller Andrew Currer during his service with the Victorian Naval Contingent to the Boxer Rebellion. Currer was born in April 1873 in Richmond, Victoria, and joined the Victorian Navy in 1900. He travelled to China with the Victorian Contingent aboard the SS Salamis in July 1900, and returned to Australia in April 1901 aboard the SS Chingtu. Currer later joined the Victorian Civil Service, and eventually rose to become head of the photographic branch at the Department of Lands. He was also, for a time, secretary of the Boxer Rebellion Contingent Association. Andrew Currer died in Richmond in 1942.