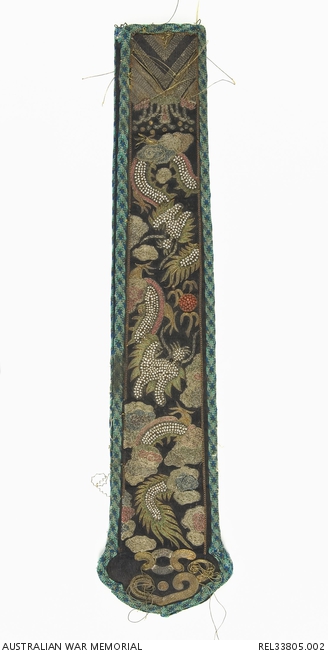 Embroidered and beaded fan case made of black cotton fabric backed with cardboard, and is embroidered on both sides with dragon designs. The bodies of the dragons highlighted by small freshwater seed pearl beads, while most of the other embroidery is in gold thread with colours worked through. The case is edged with a woven cotton tape in green, blue, white and brown. Most of the seam stitching joining the two halves of the case has perished, leaving them connected only at the bottom.

Embroidered soft case for the souvenir fan obtained by Able Seaman Signaller Andrew Currer during his service with the Victorian Naval Contingent to the Boxer Rebellion. Currer was born in April 1873 in Richmond, Victoria, and joined the Victorian Navy in 1900. He travelled to China with the Victorian Contingent aboard the SS Salamis in July 1900, and returned to Australia in April 1901 aboard the SS Chingtu. Currer later joined the Victorian Civil Service, and eventually rose to become head of the photographic branch at the Department of Lands. He was also, for a time, secretary of the Boxer Rebellion Contingent Association. Andrew Currer died in Richmond in 1942.