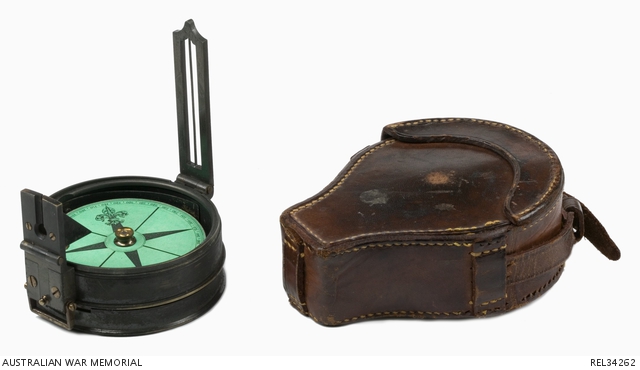 Prismatic compass in leather case. The compass is of brass with a removable brass cap, and there is a chrome plated brass screw fitting on the base. The glass face is missing, enabling the card to be lifted out. The case is pear shaped with a crescent shaped lid which hinges to one side via a tongue of leather. The lid is secured by a small leather strap with a steel buckle. The interior of the case is lined with faded purple velveteen. The adjustable leather carry strap is missing.

This compass was carried by Lieutenant Vincent Maxwell Chataway MC during his service with 9 Battalion. Born in 1892, Chataway was a 23 year old student and living in Cleveland, Queensland when he enlisted in the AIF in 1915. He embarked on HMAT Clan McGillvray as a 2nd lieutenant with the 20th reinforcements to 9 Battalion on 7 September 1916. Promoted to lieutenant in early April 1917, Chataway was awarded the Military Cross for his actions at Lagnicourt later in the same month. He returned to Australia on 18 July 1919.