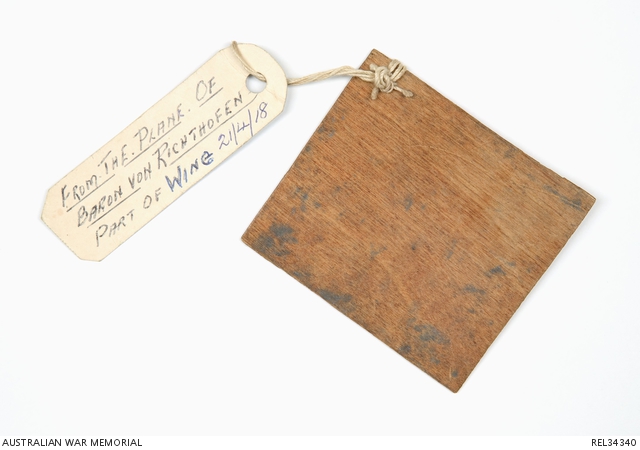 Square of aircraft grade millimetre plywood. A hole has been punched in one corner to allow a label to be attached, which reads 'From the plane of / Baron von Richthofen / part of wing 21/4/18.'

Associated with the service of 9975 Extra Regimental Corporal Frederick Rhodes. Rhodes was born in Gravesend, Kent in England in 1889 and was working as a shop assistant in Sydney when he enlisted in the 1st Field Artillery Brigade on 14 October 1915. He embarked for Cairo on 17 December aboard HMAT Berrima as a member of the brigade's 13th Reinforcements. Rhodes was taken on strength by the Divisional Artillery Column on 24 January 1916 and posted to No. 1 Section. He transferred to 5 Division Artillery on 14 March 1916 before being taken on strength by the 15th Field Artillery Brigade, 60th Battery as a Gunner. Rhodes proceeded to join the British Expeditionary Force, Alexandria on 17 June and embarked from France. He arrived at Marseilles on 23 June. Rhodes transferred to the 25th Field Artillery Brigade in the field on 9 July then to the 14th Field Artillery Brigade on 24 January 1917. He was wounded in action on 19 April and admitted to the 3rd Australian Field Ambulance suffering a gunshot wound to his right thigh. He was transferred to England on 24 April, to the Central Military Hospital, Fort Pitt. After a period of convalescence, Rhodes returned to duty on 21 August. He proceeded overseas to France and rejoined his unit as a member of 53 Battery on 25 November. Rhodes remained in the field with this unit until the end of the war. On 21 April 1918, Rhodes was at the 53rd Battery's forward observation post, observing the Germans in their trenches. There he saw Baron Manfred von Richthofen's triplane break away from his Squadron and pursue a lone Sopwith Camel piloted by Lieutenant Wilfred May. Rhodes left his post soon after to repair a broken communication line. While in the field Rhodes saw both Richthofen and May flying over the 53rd Battery at a height of approximately 40 feet from a distance of approximately 100 yards. He did not witness Richthofen's aircraft crash or see the triplane after the fact, although he managed to acquire some items from the wreck. Rhodes however did see Richthofen's body outside the 53rd battery's dugout. It was on a stretcher carried by members of the Airforce. Rhodes returned to Australia aboard HT Ypiranga on 15 November 1919 and arrived in Sydney on 9 January 1920. He was discharged from the Australian Imperial Force on 7 April.