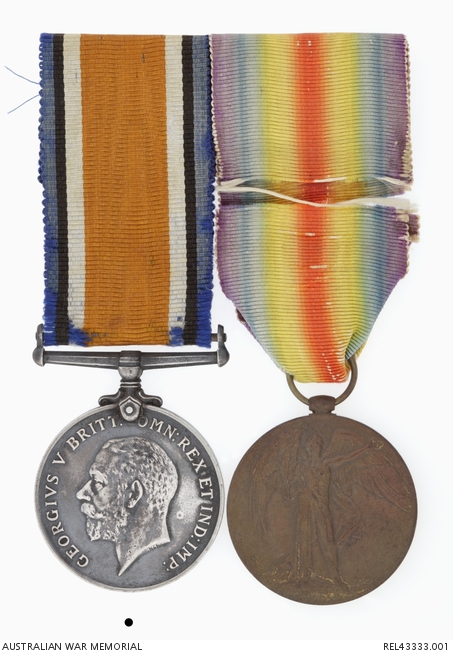 British War Medal 1914-20, impressed around the edge with recipient's details.

Associated with the service of 2136A Private William Percival Hannell, who was born in Newcastle in 1878. Hannell was working as a coal trimmer, lining up and loading coal ships in the Newcastle harbour when the First World War began. He enlisted in the AIF on 26 August 1915 and after completing his initial training at Liverpool Camp, was posted to the 3rd reinforcements for 31 Battalion.

On 18 February 1916, Hannell embarked from Melbourne aboard HMAT Ballarat. During the voyage, he was found drinking while on sentry duty and fined ten pounds. After disembarking in Egypt on the morning of 23 March, he disappeared that afternoon. He returned to camp on the morning of 26 March and was charged with being Absent Without Leave (AWL). He was awarded 14 days Field Punishment Number 2 (FP No. 2) and fined 18 days pay. FP No. 2 involved the prisoner having their hands cuffed and feet fettered and being subject to heavy labour.

Hannell began training with his battalion on 20 April for the war in France. In late May, he was transferred to Base Details, as the battalion was over strength. In early June, he travelled to England, where he was sent to 8 Training Battalion. During his time in England he went AWL after being admonished for answering back to an officer and again received FP No. 2.

He was sent to France in mid-September and spent the remainder of the year at the training depot in Etaples. Hannell rejoined 31 Battalion on 26 January 1917. The battalion moved into the rear area at Delville Wood on 14 February and the following day, as the battalion was beginning the move into the intermediate line, Hannell reported sick with rheumatism and was sent to hospital.

Hannell was evacuated to Camiers and remained hospitalised until early March. Following his release from hospital, He reported to the Base Details depot at Etaples remaining there for the rest of the month. On 31 March, he was found out of bounds drunk and without a pass. After being charged, he was sentenced to 21 days of Field Punishment Number 1 (FP No. 1). FP No. 1 was the same as FP No. 2, except that the prisoner would have been sent to a special camp where he would be tied to a pole or gun wheel for several hours a day for three out of four days for a maximum of 21 days of the sentence

After completing his punishment, Hannell returned to 31 Battalion which had just been relieved from the front line on 6 April. The Battalion remained around Montauban Brigade Camp near Bapaume for the next month and when orders were given on the morning of 9 May for a move back into the front line, Hannell again went AWL. By the time 31 Battalion moved back into the line that afternoon, Hannell had made his way from Montauban Brigade Camp to Albert where he handed himself in to the Military Police later that night. He was immediately incarcerated to await punishment.

On 9 June, Hannell was tried under a Field General Court Martial with ‘Deserting His Majesty’s services...after being duly warned that his Battalion would shortly proceed to the trenches [he] absented himself without leave.’ He pled guilty and was sentenced to 3 years penal servitude, which was commuted to 90 days FP No. 1.

Hannell was transported to Number 1 ANZAC Field Punishment Compound on 19 June to begin his sentence. He rejoined 31 Battalion briefly at the end of July before again returning to No. 1 ANZAC FP Compound in early August. He again rejoined his unit on 8 September before going AWL again two days later.

He remained at large until 22 September, by which time 31 Battalion had moved from France into Belgium in preparation for the 3rd Battle of Ypres. Once captured, he was held until 9 October, when he was again court martialled. This time he was given a custodial sentence of 2 years hard labour.

Initially, Hannell was sent back to No. 1 ANZAC FP Compound to prevent him further absconding. He was then sent to Number 10 Military Prison at Dunkirk on 10 December. He remained imprisoned until his sentence was suspended in July 1918.

Hannell once again rejoined 31 Battalion, this time in the front line in the Dernancourt Sector. In early August, the Battalion began to move towards Villers-Brettoneux. During the move, Hannell again absconded.

He was apprehended on 16 August but managed to escape from custody on 3 September. He went on the run and managed to evade re-capture. He handed himself in on the day the war ended, 11 November.

For the third time Hannell faced a Field General Court Martial and was charged with being absent without leave and deliberately losing his arms and equipment. He pled guilty to the first charge and not guilty to the second, but he was found guilty on both counts. He was sentenced to 2 years hard labour. He was imprisoned at No.7 Military Prison at Les Attaques near Calais in February 1919.

Like many Australian prisoners, Hannell was released from prison in June and sent to Tidworth, England to await transport back to Australia. On 3 July, he embarked from England aboard Prinz Hubertus, disembarking in Sydney at the end of August. He was discharged from the AIF in late September 1919.

By the 1930’s, Hannell had moved to the suburbs of Sydney but found employment difficult to obtain. He died in 1941.