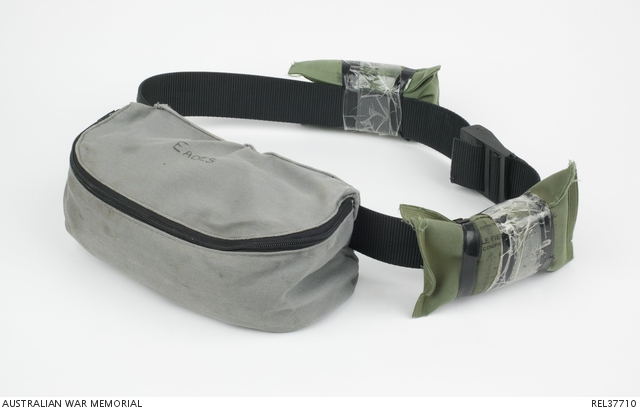 Black vinyl belt with plastic clamp. On both sides of the belt is a single olive green Australian Defence Force issued field dressing taped with clear and black tape. On the rear of the belt is a dark gray cotton bag with 'EADES' handwritten in blank ink on the top. Inside the bag is a flash hood and pair of flash gloves.

This web belt with emergency equipment is associated with the service of Chief Petty Officer (CPO) Shayne Eades who served onboard HMAS Toowoomba during Operation Catalyst in 2007.

He was posted to HMAS Toowoomba on 24 August 2006. His category onboard this ship at the time was CPO Marine Technician where his role was to be in charge of maintaining refrigeration units, air-conditioning units, cooling water pumps for the engine rooms, galley equipment including ovens, fry pans and deep fat fryers. He was also second in command for refuelling the ship while at sea with Coalition ships.