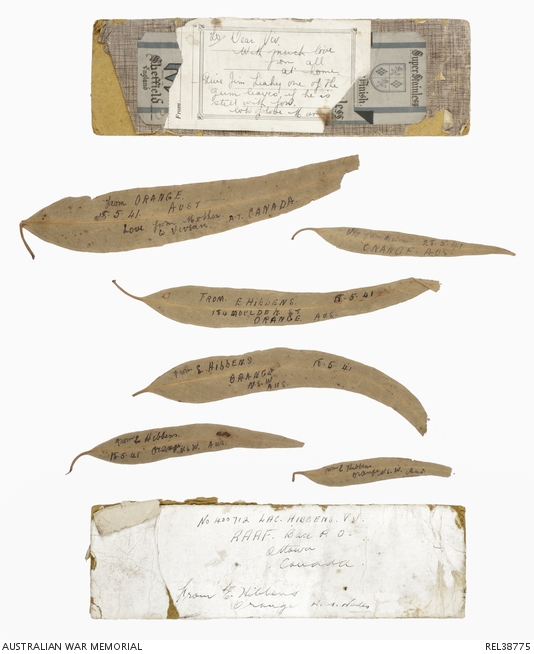 Six dried eucalyptus (gum) leaves of varying sizes. Each bears an ink inscription: 'Mrs E Hibbens Orange N.S.W. Aus'/ 'From E Hibbens 18.5.41 Orange. N.S.W. Aus'/ 'Viv from Mum. 28.5.41 ORANGE. AUS.'/ 'From E. HibbENS. 18.5.41 ORANGE N.S.W AUS.'/ 'FROM. E. HibbENS. 18.5.41 184 MOULDEN ST ORANGE. AUS.'/ and 'from ORANGE. 18.5.41. AUST Love from Mother to Vivian AT CANADA'. The leaves are contained in their original packaging consisting of two pieces of cardboard cut from a box that once contained cutlery made in Sheffield, England, tied together with fine cotton string. One side is addressed 'No 400712 LAC. HIBBENS. V J. RAAF Base P.O. Ottawa Canada. from E Hibbens Orange N.S. Wales'. The other side has a label adhered to it reading 'To/ Dear Viv, With much love from all at home. Give Jim Leahy one of the gum leaves if he is still with you. lots of love Mum.'

Associated with the service of Vivian Joseph 'Smoky' Hibbens who was born at Bemboka, NSW in January 1922. He was working as a bank officer in Melbourne when he enlisted in the Royal Australian Air Force (RAAF) on 13 October 1940, at the age of 18. Hibbens had previously served for a year in the militia, in the 8th Light Horse Regiment (Indi Light Horse). Assigned the service number 400712 Hibbens was accepted for aircrew training in December 1940 and promoted to leading aircraftman. After initial pilot training at 5 Elementary Flying Training School at Narromine, NSW, Hibbens was sent to Canada for further flying experience with the Empire Air Training Scheme, arriving there in April 1941.

In May 1941 his mother, Ethel Hibbens, then living in Orange, NSW, picked and dried these gum leaves before writing messages on them and sending them to her son in Canada. Hibbens graduated as an airman pilot on 13 September 1941, after training at Camp Borden and Halifax, and was promoted to sergeant. Shortly afterwards he moved to the United Kingdom to undertake training as a Spitfire pilot, attached to 234 Squadron at Ibsley in Hampshire.