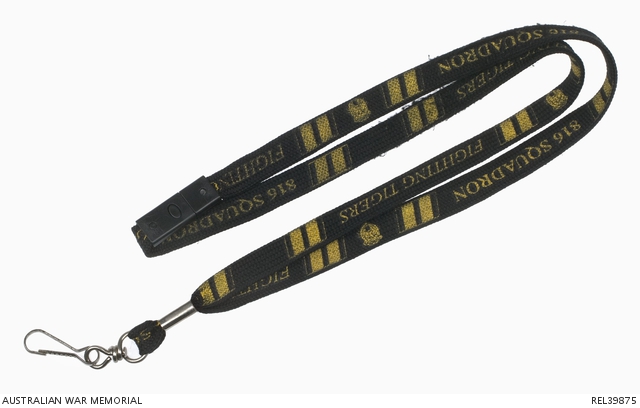 Black lanyard with '816 SQUADRON', a snarling tiger's head and 'FIGHTING TIGERS' printed in yellow running along the lanyard. The lanyard has a plastic clip at the back of the neck for easy removal. At the front of the lanyard a metal band has been wrapped around the two lanyard ends, forming a loop through which a metal swivel and clip have been threaded.

Worn by Able Seaman Ryan Beevor in the Persian Gulf in 2005. Beevor deployed in late May 2005 to the Persian Gulf in HMAS Newcastle as part of Operation Catalyst. Beevor served as a avionics technician, working on the 'Sea Hawk' helicopters with Flight 1, made up of members of 816 Squadron, RAN. Beevor returned to Australia in November 2005 after the completion of HMAS Newcastle's tour of operations.