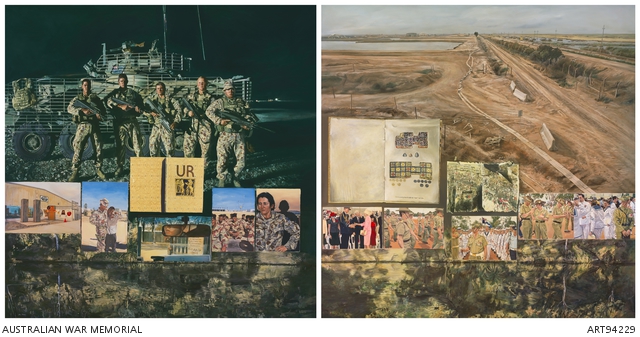 Lyndell Brown and Charles Green were appointed official artists in 2007 to document Australia's presence in Iraq and Afghanistan. They were subsequently commissioned in 2009 to document the national parade to mark the end of the Australian Defence Force's (ADF) contribution to the coalition forces in Iraq, which officially ended on 31 July 2009 after six years.

The diptych "Night and day" draws on the photographic archive collected while the artists were embedded in Iraq, and their observation of the Welcome Home parade. Each panel is a complete work with a dominant image; its centre partially concealed by a series of small pictures which read like a story, layering references to the past and present, with motifs of ancient and contemporary culture. The "story" begins with the event that catapulted the western world into the "War on Terror": the terrorist attacks in the United States on 11 September 2001. The remaining images reflect on Australia's contribution to the rebuilding and stabilisation of Iraq and the ceremony officially welcoming home Australian personnel. Common to each panel is the body of water below the series of small images, the Yarra River in Melbourne, and a book belonging to Charles Green's father. "UR: The first phases", by British archeologist Sir Leonard Woolley, is a visual record of the excavation of the ziggurat of Ur, southern Iraq, between 1922 and 1934. It contributes to a sense of the history of a place unfamiliar to many Australians; it also acts as a personal link to the artists and their sense of place in Victoria.