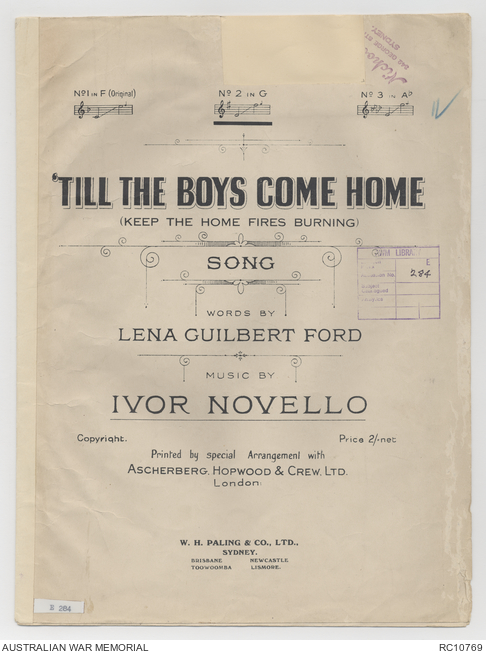 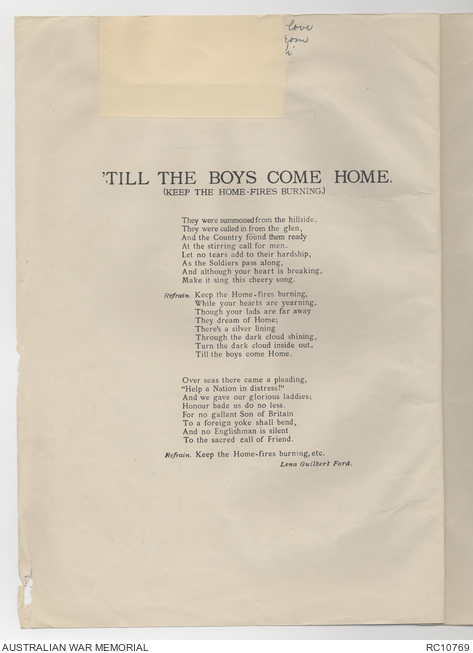 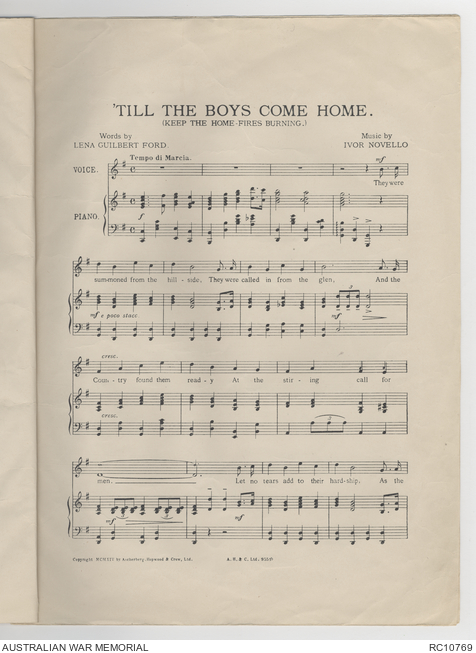 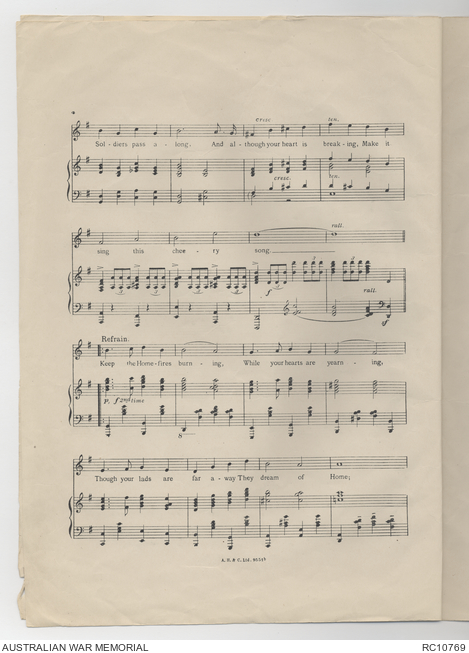 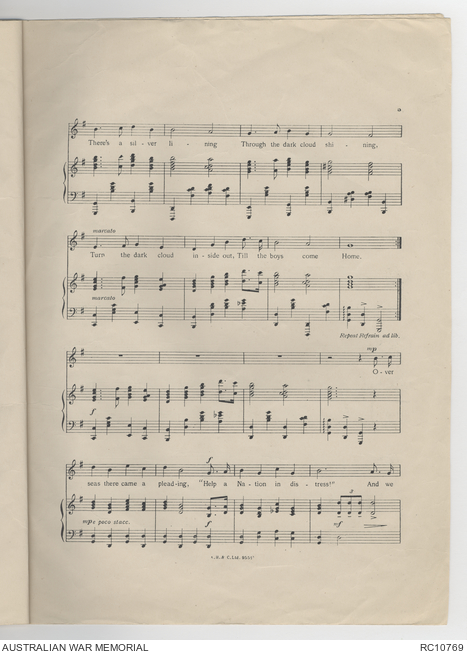 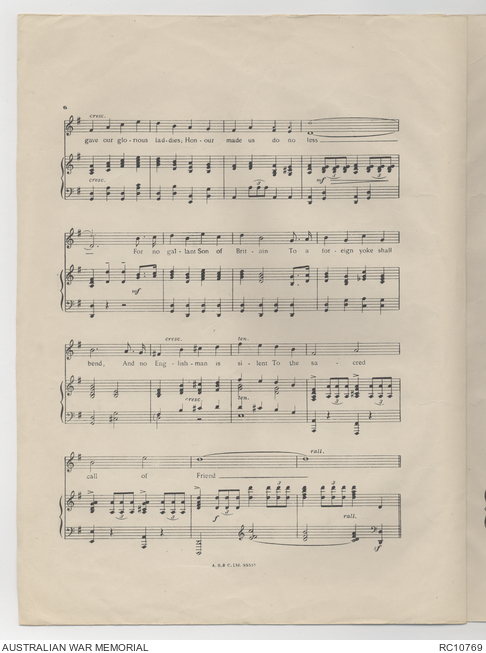 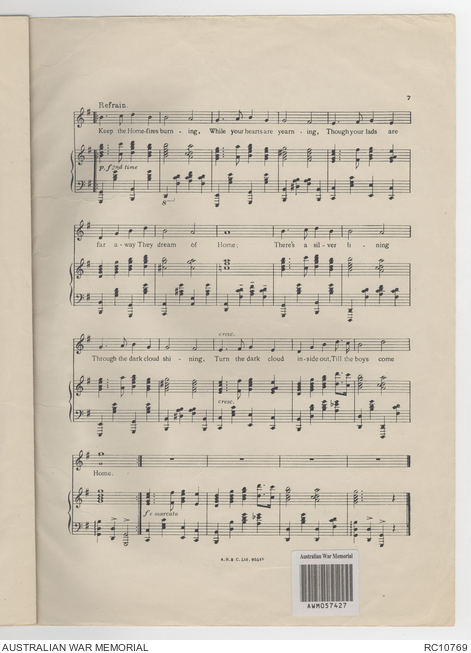 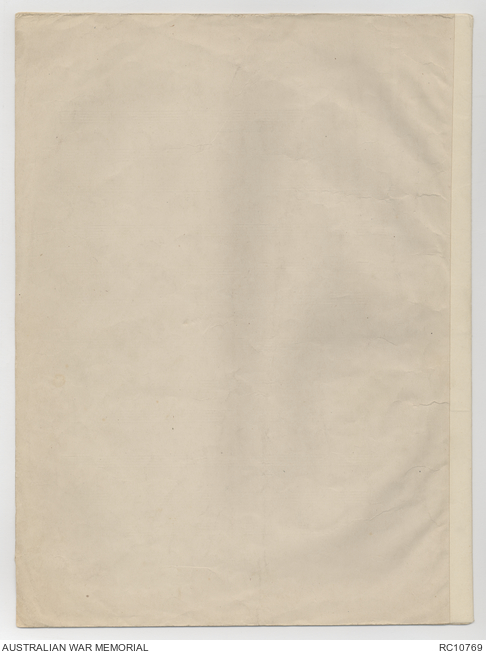 This copy of the song was published about 1915 by the London music publishers, Ascherberg, Hopwood & Crew Ltd and printed under licence by the Sydney based music publisher, W H Paling & Co. It appears that this copy was sold by the music seller Nicholson's on George Street, Sydney, although part of the seller's stamp has been removed. A dedication to the original owner of this piece of music has also been removed from the top of the front cover. This copy originally sold for 2/- and has been written for vocal with piano accompaniment.

The actress, commedienne and singer Ada Reeve reportedly commented about this song, in an article published in Ballarat's newspaper, The Evening Echo: 'Our soldiers care less for the orginary comics than for real old-fashioned home melodies - familiar faces and places; the fireside, the wife and mother and babes'. These sentiments are expressed frequently throughout this song, especially during the refrain. The lyrics focus on dreams of home by those away at the war, and those waiting at home for their return.

This sentiment was also picked up in an article published by The Daily Telegraph, Sydney, on 1 January 1916, commenting 'An examination of the song reveals the more serious, yet cheerful spirit that has found its way into the war songs now coming forward...' This article focused on the songs that were being produced during the war years with an emphasis on this song, remarking '...at last the right chord has been touched in Ivor Novello's "Till the Boys Come Home (Keep the Home Fires Burning)"...The song has already met with a remarkable reception in England.' The article continued with a quote from the publication Musical News: 'the song resounds throughout the length and breadth of the land; it is the telling number in the repertoire of the recruiting bands, the joy of the route march, and the special favourite of the street boy whistler. It has completely knocked out the war songs of a year ago and reigns supreme.' The Daily Telegraph article continued with its analysis of this song reporting: 'The new song gains its effect by simple means; inevitably it is in marching time, the rhythm being well marked throughout. But this is only the case when singing with the accompaniment which fills up the beats, on certain holding notes, with an irresistable swing. One such passage of four bars ascends in trumpet tones like a surging wave into the sonorous refrain - "Keep the Home Fires Burning". This refrain has a thoroughly taking melody.'

Born as David Ivor Davies, Ivor Novello was the only son of Madame Clara Novello Davies. His mother was a British singer and composer who had settled as a teacher in New York CIty. She was also the conductor of the the Royal Welsh Ladies' Choir and the winner of several choral singing competitions. Novello had begun singing at a very early age. One story reported in the Sydney Morning Herald, indicates he performed 'Hear Ye, Israel' and 'Poor Wandering One', at the age of 6, for the British contralto Clara Butt. Three years later he won a singing scholarship at Magdalen College, Oxford, where he was the first solo boy for five years. His first song, 'Spring of the Year', was performed by the American high soprano Evangeline Florence at Royal Albert Hall, London, when he was 15. Novello was 21 years old when he wrote the melody, which according to Novello, took only 10 minutes to write. He also reported that the lyrics took only another 10 minutes to write, and the whole song was compiled in less than 30 minutes. According to 'Punch', the song was purposefully written for Mr George Graystone, a singer at the Tivoli Theatre, London, who introduced the song with the Warwick Burlesquers on Saturday 16 October 1915. One of the anecdotal stories that Novello relates of this song is requesting a recruiting band to play it beneath the window of a publisher who had turned it down. Although it was rejected by the first publishing house, it was picked up by the second who published it within a couple of months. After this, it made its way to the soldiers in France and Belgium. Novello visited the trenches in 1916 as a member of Lena Ashwall's concert party where he witnessed 3000 Canadian and Australian soldiers marching past to the chorus of 'Keep the home fires burning'.

Lena Ford, was born in Pennsylvania, USA and graduated from Elmira College, a private liberal arts college located at Elmira, a town in the southern tier area of New York state. Elmira College was one of the first colleges in the US to provide degrees to women that were equal to the degrees granted to men with the first students arriving in 1855. One of the early names of the college was Elmira Female College. Ford later married and settled in Elmira. She moved to England with her mother and son, Walter, in about 1898. During the First World War, she collaborated with Novello to write 'Keep the homefires burning' and also opened her home to soldiers during the war years. Some of her other published musical works include 'When God gave you to me', 'We are coming, Mother England', and 'God guard you' which was a collaboration with Westell Gordon. In 1918, it was reported that she had been working on Fleet Street for about 10 years. On 7 March 1918, a German air raid occured over London and two bombs fell on the city. Lena Ford and her son were killed when one of these bombs fell on their home.

One of the early fundraising events mentioned in Australian newspapers during the First World War featuring 'Keep the home fires burning', was a military gymkhana at the Narracoote recreation ground. The event was held on Saturday 23 October 1915 with proceeds donated to the Red Cross and the song performed by Miss I Makin. During December 1915, the Petersburg Red Cross in South Australia also organised a concert to raise funds. Miss Ida Hall performed this song as part of the concert program. Signora Tanta performed this song on Thursday, 6 April 1916 at one of a series of concert held at Prahran Town Hall to raise money for the Prahran Patriotic and Red Cross Funds. Madame Evelyn Asheley also performed this song in September 1916, as her second encore performance at a concert organised by the Yarraville Citizens Club to raise money for the Soldiers and Sailors Fund. Similarly, the song was popular at events held for other fundraising purposes such as the concert organised to raise money for the Brunswick Heads Hall Fund. This concert was held on Monday 27 December 1916 with Miss Olga Shepherd performed the song during the evening.

'Keep the home fires burning' was also a very popular song during concerts by professional performers. This was particularly the case during 1915 when it was performed by travelling entertainment companies The Court Cards and The Dandies. The first group were British and toured Australia and New Zealand during 1915. They performed for five nights at the Mechanic’s Hall, Ballarat, commencing on Saturday 13 November. One of their members was Mr George Graystone, the original performer of 'Keep the home fires burning.' The second group were also British and organised by Edward Branscombe. Of the performance at the Exhibition Gardens, Adelaide, on 9 December 1915, the Daily Herald newspaper in Adelaide, reported that the song was 'already one of the standard favourites' and was performed during the evening by Mr Marshall Lawrence.

This song was also popular with Australians and other Allied soldiers serving during the First World War as evidenced by mentions in letters home, concert programs and observations of entertainment for soldiers. The Sun newspaper reported, on 2 November 1915, that British minister, Reverend R J Campbell, visited wounded troops in hospitals across France and Flanders, Belgium, and observed one evening where the men were singing 'Keep the home fires burning' during entertainment at one of the YMCA huts. Campbell reported: 'They knew every line of every verse and sang it with rare gusto'. He reported that the singing was interrupted by an officer requesting A, B and C Regiments to move outside. While the remaining men continued singing 'as if nothing had happened', the men who had left were back in the trenches 'within an hour' and the officers that he had been talking to that night were all dead by the next morning.

The lyrics of the song, particularly the chorus, also struck a chord with the soldiers as evidenced by letters written by Driver S C Johnson, 5th Engineers Company, and 1189 Private James Shannon, of Bairnsdale, who served with the 22nd Battalion. Johnson concluded a letter he wrote to thank three year old Gwennie Dodds of Ivanhoe for the plum pudding she sent with the chorus lyrics from what he described as 'a little song in Scotland'. In a letter dated 21 July 1916, published in the local newspaper, Shannon wrote 'As we march along on the winding white road we sing some of the most popular songs, but the one that we always return to is[...]'. After this he wrote the lyrics of the chorus for 'Keep the homefires burning'. He then continues commenting on the song, writing, 'So our song is not of war, but the ones we are ever thinking of and longing to see again.'

'Keep the home fires burning' was also a song that frequently appeared in programs for concerts initiated by service personnel during the First World War. This was especially true of troopships and convalescent homes. Sergeant Alfred George Hancott performed this song on 14 March 1916 during a farewell concert for Mr and Mrs H Holt at Octagon Convalescent Home, Darling Point, New South Wales. Lieutenant Frederick William Stratford performed this song during a concert aboard troopship TSS Demosthenes on Saturday 1 July 1916 and a couple of months later, Private Henderson, with the Eat-Em-Alive Minstrels, performed the song aboard SS Themistocles on Saturday 26 August 1916.

Welcome home concerts and social events for Australian service personnel also featured this song, where it was often performed by children. Traralgon soldier, Tom Wright, returned home in 1919 to a welcome home reception where this song was performed by 30 children. A report of this event, dated 20 May 1919, stated Wright was also required to greet his nieces and nephews, some of whom had been born during his absence at the war, and who were all reportedly eager to see “Uncle Tom”. A chorus of children also performed the song during the welcome reception for Private W Robertson at Campbell’s Hall, Day Dawn, Victoria on 26 February 1919. Earlier, on 3 January 1917, the song was also performed by the Engineer’s Depot Band to welcome home wounded soldiers in Sydney with the Sydney Morning Herald reporting that this indicated the song had 'permeated military circles'.