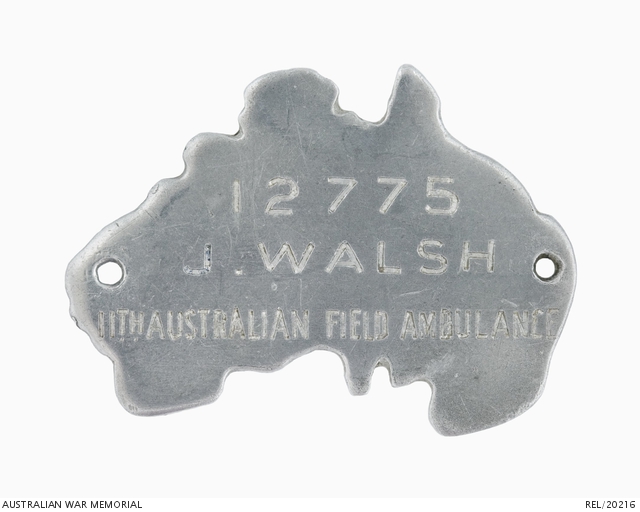 Small aluminium identity disc in shape of Australia designed to attached to a wrist strap by two mounting holes. The face has been inscribed '12775 / J. WALSH / 11th AUSTRALIAN FIELD AMBULANCE'.

Related to the service of 12775 John Walsh, a postal assistant of Goodwood, South Australia, born Walleroo, who enlisted on 8 January 1916 aged 21, and was posted to 11 Field Ambulance as a stretcher bearer. He embarked from Adelaide aboard HMAT Suevic on 31 May 1916, arriving at Plymoth on 21 July. A bout of tonsilitis delayed his transfer to France by a number of weeks and it wasn't until 24 November 1916 that he crossed that Channel. The first few weeks of January 1917 were bitterly cold and Walsh contracted influenza in late January, laying him off for a week. He suffered from gas inhalation on 8 June 1917, resulting in a six week recovery period at Etaples. Walsh applied for a commission in the infantry in November 1918 and was appointed a second lieutenant in 44 Battalion. He returned to Australia aboard the transport SS 'China', arriving on 6 June 1919.

Private Walsh was in the Vaux-sur-Somme area in France on 21 April 1918 when his attention was drawn to an aerial dogfight passing over him and heading down the valley. He witnessed Manfred von Richthofen's triplane crashing 'a few fields away' and took the opportunity to souvenir this small section of aluminium (probably removed from the aircraft's cowling panel) which he subsequently had shaped and inscribed upon his return to England in October 1918. According to his daughter Joan, born in 1921, this tag was originally fitted with a silver chain bracelet. Walsh's brother-in-law was Victoria Cross winner Temporary Corporal Lawrence Carthage Weathers, 43 Battalion.