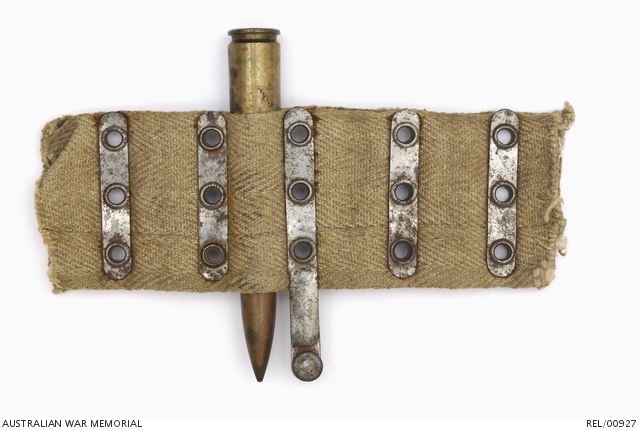 A section of German machine gun ammunition belt as used with Maxim MG08 and LMG08 guns and associated development models. The belt is of the 'Ersatz pattern' believed to have been introduced to service from 1917, and has steel rather than brass fittings. It consists of two layers of khaki cotton webbing, joined with riveted steel dividers forming pockets for the cartridges. This section of belt comprises four such pockets, and is roughly cut off in the middle of the adjoining pocket at either end. The third of the steel dividers (each of which is held in place by three rivets) has a projection at the front, indicating the correct depth to which the bullet should be inserted into the pocket. A single 7.92mm bullet is fitted to one pocket, its impressed headstamp markings reading 'UN 6 17 S67'.

Section of cotton webbing ammunition belt once believed to have come from one of the two Luft Maschinen Gewehr (LMG) 08/15s fitted to Baron Manfred von Richthofen's Fokker Dr I aircraft.

The donor, Frank Ronald Rawlinson, enlisted in the AIF in August 1916 and served as 424A 2nd Class Air Mechanic with 3 Squadron, Australian Flying Corps. When Richthofen's body and the remains of his aircraft were brought to the airfield of 3 Sqadron at Bertangles on the evening of 21 April 1918, Rawlinson together with 666 Sergeant Abner Gilchrist Dalzell and 569 Corporal Edward James McCarty assisted with the removal of clothing from the body. Rawlinson obtained a section of the overalls and part of a belt as souvenirs. He also obtained several items from the Fokker Triplane. These were all donated to the Memorial by him in 1960. A letter describing the circumstances is held on File 749/084/005. Apart from confirming the origin of these relics the letter also confirmed that von Richthofen was wearing a parachute and harness when he was shot down over Australian positions near Corbie.

Rawlinson's access to both the body and aircraft allowed him to collect a number of significant and uncontested relics, which would otherwise support the provenance of the machine gun belt section.

However, research undertaken by Mr Lloyd Leichentritt proves that the belt cannot have come from Manfred Von Richthofen's guns. The machine gun belt is of a type which, it seems, was exclusively used with ground mounted MG08s and MG 08/15s. Photographic evidence does not support its adoption for air operations, where LMG 08/15 and Parabellum machine guns used 30 mm wide ammunition belts, with no extended metal tab. Further, three photographs in the AWM collection, (K00047, K00048 and K00050) which show the LMG 08/15 guns on display at 3 Squadron, clearly show the tubes which were mounted on the left hand side of each gun, which collected and led away the empty machine gun belt. Although the present day location of the guns and the tubes is unknown, the size of the tubes, relative to the guns and relative to our ammunition belt (REL/00927), may be easily determined. As the dimension of the tubes is 40mm, and the width of the belt is 60mm, it may be seen that the belt simply would not have fitted the tube.

While the provenance of the belt is unknown, its attribution for so long to Von Richthofen's aircraft is part of the enduring mythology of the 'Red Baron'

Another piece of this belt was collected by Pasquale Carisella in the USA during the 1960s. Further information can be found on File 07/2052.