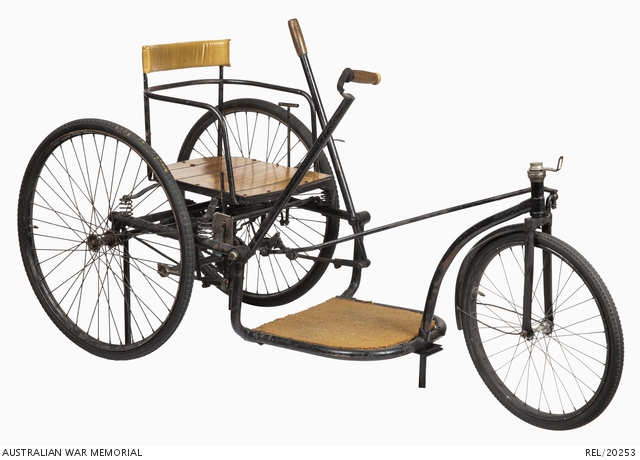 Tricycle wheelchair operated by two hand levers which control the chain mechanism, speed and direction. The wheelchair has a black metal frame with a wooden seat attached to four suspension coils, a carpeted footrest and rubber tyres.

Tricycle wheelchair used by Charles 'Charlie' Henry Stevens, co-founder of the Limbless Soldiers' Association of Victoria. It was given to him in England by the Red Cross Society after he was wounded in action in June 1918 and both his legs were amputated. Stevens was born in London on 23 January 1896. In early 1914 he migrated to Australia where he worked on a farm and later at a butchery looking after the horses and driving the delivery carts. He enlisted in the Australian Imperial Force at Wedderburn on 17 September and was allotted army number 2047. Stevens originally opted to join the Light Horse, but transferred to the transport section of the Field Ambulance when he discovered that they received steak for breakfast instead of bread and jam. On 22 December he embarked at Melbourne for the Middle East as a driver with 1 Reinforcements, 2 Field Ambulance aboard HMAT Berrima. After three months training in Egypt Stevens then proceeded to join the Mediterranean Expeditionary Force on the Gallipoli Peninsula aboard SS Mashobra. The transport section remained on the Mashobra which was later converted to a hospital ship. After the evacuation from Gallipoli in December 1915 Stevens returned to Egypt.

In February 1916 he transferred to the newly formed 14 Field Ambulance and sailed for the Western Front in June. As a driver, Stevens was responsible for driving the unit's horse drawn ambulance wagons and water carts. However, after being charged several times for disobeying orders and insubordination he was re-mustered as a private in January 1917 and sentenced to 18 months imprisonment with hard labour, later commuted to 6 months. Now serving as a stretcher bearer, Stevens was stationed at Franvillers, a small town near Amiens, when, on 22 June 1918, his commanding officer ordered two squads of stretcher bearers to relive the bearers in the line. While crossing a field on the way to the line, four German shells were fired at the party and Stevens was wounded by a 'daisy cutter' shell. He received severe shrapnel wounds to his legs, shoulder and arm resulting in the amputation of both his legs above the knee. Stevens was transferred to the United Kingdom for further treatment, and after a period of convalescence and leave he returned to Australia aboard SS Orvieto on 12 December 1919. Stevens used the tricycle wheelchair at various times, including Anzac Day marches, until his death in 1991.