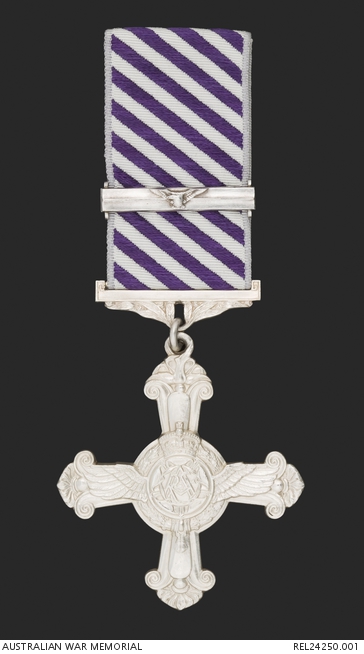 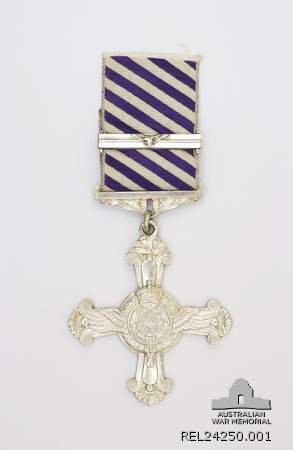 Distinguished Flying Cross (Geo VI) and Bar. Unnamed as issued, but Cross and Bar are engraved on reverse with the year of award.

Although in his thirties, and considerably older than the aircrew average, 412816 Flight Lieutenant Thomas Vyner McCarthy, RAAF, completed forty-five operations as a bomb aimer with 156 (Pathfinder) Squadron, RAF, in Europe during World War Two. A product of the Empire Air Training Sceme, he was commissioned as a Pilot Officer in July 1943, and was awarded the Distinguished Flying Cross (DFC) in December of the same year. A Bar to the award followed in June 1944. McCarthy was a member of the specially selected crew, all highly experienced and decorated airmen, who flew the Australian War Memorial's Lancaster W4783 'G for George' to Australia in October 1944 for the 3rd Victory Loan tour. The citation for the award of the Distinguished Flying Cross reads as follows: 'Pilot Officer McCarthy has participated in many operations against heavily defended targets in enemy territory. On one occasion in September 1943, he was Bomb Aimer in an aircraft detailed for an attack on Mannheim. He reached the target early and, despite heavy anti-aircraft fire and illumination by searchlights, he guided the pilot in and around the defences until he was able to complete his mission successfully. At all times Pilot Officer McCarthy has set a splendid example by his courage and determination to complete his allotted task.' The citation for the award of a Bar to the DFC reads as follows: 'Flight Lieutenant McCarthy has displayed great coolness and determination as a Bomb Aimer. This officer has operated in this capacity over most of the heavily defended objectives in enemy territory. Under very trying circumstances and in the face of heavy opposition, he has invariably displayed courage of a high order and unfailing accuracy.'