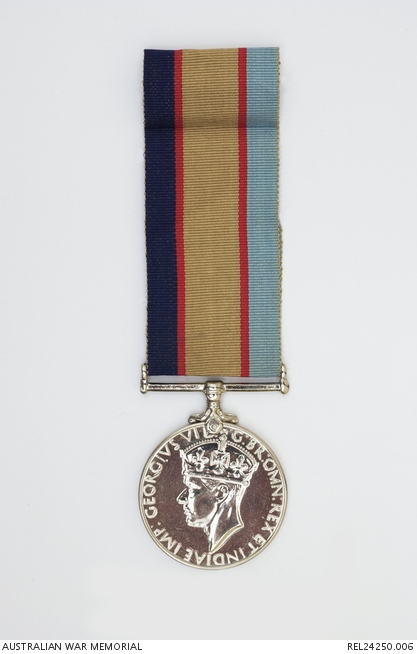 Australia Service Medal. This medal is a late issue (1998) with the recipient's details pantograph engraved around the edge.

Although in his thirties, and considerably older than the aircrew average, 412816 Flight Lieutenant Thomas Vyner McCarthy, RAAF, completed forty-five operations as a bomb aimer with 156 (Pathfinder) Squadron, RAF, in Europe during World War Two. A product of the Empire Air Training Sceme, he was commissioned as a Pilot Officer in July 1943, and was awarded the Distinguished Flying Cross in December of the same year. A Bar to the award followed in June 1944. McCarthy was a member of the specially selected crew, all highly experienced and decorated airmen, who flew the Australian War Memorial's Lancaster W4783 'G for George' to Australia in October 1944 for the 3rd Victory Loan tour. Tom McCarthy died in 1985.