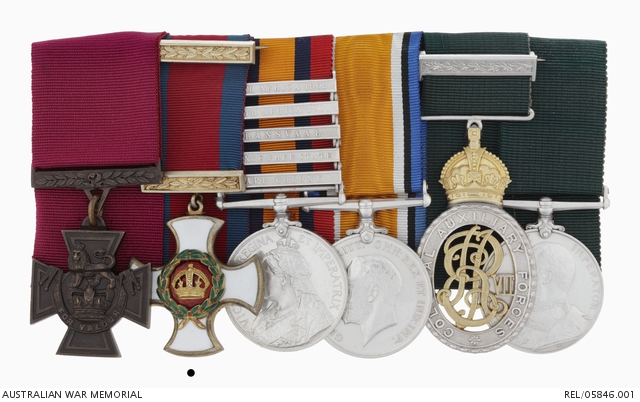 This Distinguished Service Order was awarded to Lieutenant Colonel Leslie Cecil Maygar, who was born near Kilmore, Victoria on 27 May 1868, the seventh son of Edwin Willis and Helen Maygar. He was educated at Alexandra and Kilmore public schools. Later, in partnership with his father and brothers, he bought Strathearn Station, near Longwood, Euroa. A highly proficient horseman, he enlisted as a volunteer in the Victorian Mounted Rifles in March 1891.

With the outbreak of war in South Africa in 1899, Magyar was keen to enlist but was initially rejected for service on medical grounds before being accepted into the 5th Contingent of the Victorian Mounted Rifles. For his actions during fighting near Geelhoutboom on 23 November 1901, he was awarded the Victoria Cross.

On his return to Australia Maygar resumed his pre-war occupation on the land near Euroa. With the outbreak of the First World War on 4 August 1914, Maygar immediately offered his services and within three weeks was appointed a captain commanding B Squadron of the 4th Light Horse Regiment. On 19 October, he embarked with his unit for Egypt, arriving at Alexandria on 11 December. In January 1915 he was promoted to major.

Following training, the regiment moved to Gallipoli, arriving as an unmounted unit on 24 May. The regiment was deployed at Ryrie's Post, Lone Pine, Courtney's Post and Leane's Trenches. On 17 October, Maygar was promoted to temporary lieutenant colonel and given command of 8 Light Horse Regiment (LHR). The regiment was evacuated from the Peninsula on 20 December.\
]
The move to Egypt saw the regiment reunited with their horses before moving east for operations in Sinai and Palestine as part of Major General Harry Chauvel's Anzac Mounted Division. In August 1916, 8LHR was involved in heavy action pushing the advance following the battle for Romani and later contributed to operations at Sagia and Hod el Bada.

In December, the Anzac Mounted Division was ordered to capture the enemy held village of Magdhaba. The assault on 23 December, with 8LHR attacking from a ridge north of the village, almost met with failure when strong resistance delayed the capture of vital water supplies. Just as Chauvel proposed a withdrawal, 1 Light Horse Brigade broke through, signalling a change of fortune, and within hours the objective was taken. During the assault, 8LHR lost five officers and ten other ranks either killed or wounded.

In January 1917, 8LHR, though playing a reserve role in the assault on Rafa, provided outposts against a large column of enemy reinforcements. In March and April the regiment saw action in the failed attacks on Gaza. During heavy fighting in the second attempt on 19 April, the regiment found itself exposed in a gap created when two flanking brigades were forced to diverge. By 4pm it was obvious the attack had failed and the decision was made to withdraw, by which time 8LHR had suffered 73 casualties. Official Historian H S Gullet said of Maygar's conduct during the fighting that: 'It was a day when true leaders recognised that their men needed inspiration, and Maygar gave it in the finest manner.'

For his leadership during the attacks at Maghdaba and Rafa, Maygar was awarded the Distinguished Service Order on 3 June. The recommendation for the award reads: 'A gallant leader of men. His services during the occupation of El Arish and the actions at Maghdaba and Rafa have been specially brought to my notice. At Rafa especially, when his Regiment was detached to deal with the enemy's relieving column, which he dealt with in a most satisfactory manner.'

On 31 October at Beersheba, Maygar was severely wounded during a German aerial attack. Despite surgery to remove his shattered arm he died from blood loss the following day. Maygar is buried in grave number Q 82 of the Beersheba War Cemetery.