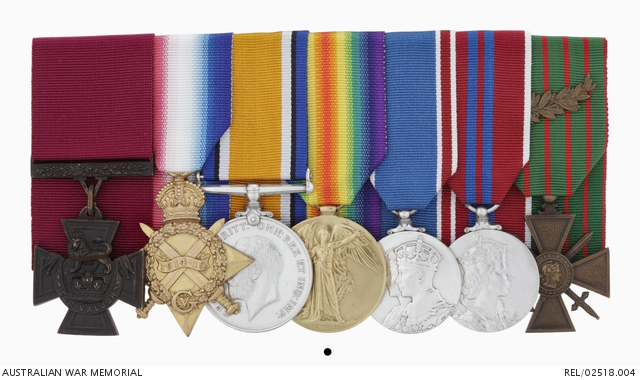 Victory Medal with Mentioned in Despatches oakleaf. Impressed around edge with recipient's details.

422 Lawrence Dominic 'Fat' McCarthy was born in York, Western Australia in 1892, the son of Florence and Anne (nee Sherry) McCarthy. He was raised in the Catholic run Clontarf Orphanage in Perth after the death of his mother in 1898. He had a Catholic school education followed by four years farming under the tutelage of a Mr John White at Jennacubbine near Northam. He served for two and a half years in the 18th Light Horse Regiment. Prior to the outbreak of the First World War, he was working as a contractor at Lion Mill.

McCarthy enlisted in the AIF on 16 October 1914 at Black Boy Hill on the outskirts of Perth, and was posted to 16 Battalion ( Bn), 4 Brigade (Bde). Before long, his large physique earned him the nickname 'Fat'. The battalion embarked from Melbourne on 22 December 1914, bound for Egypt, arriving on 3 February 1915. Following training, 16 Bn landed on Gallipoli late on 25 April. McCarthy was promoted to lance corporal on May 15, then to corporal on 19 July. On 1 September he was promoted to sergeant though he was evacuated nine days later through illness, rejoining his unit on 13 November. He was one of the last of his unit to leave the Peninsula when the allies withdrew to Egypt in December.

After further training in Egypt the battalion moved to France in June for service on the Western Front. In August, 16 Bn took part in two failed assaults on Mouquet Farm. In February 1917, McCarthy was awarded the French Croix de Guerre for his services on Gallipoli and in France. He was promoted to company sergeant major on 8 March. The following month he suffered a gunshot wound to the left arm in fighting near Bullecourt and was evacuated to England for treatment, rejoining his unit on 9 July. While in England he was commissioned a 2nd lieutenant. He was promoted to lieutenant on 31 October.

On 23 August 1918 4 Bde was placed on the right flank of the push towards Peronne, assisting the British 32nd Division and the Australian 1st Division in the capture of the line Herleville-Chuignes-Square Wood. 16 Bn was charged to take Courtine Trench, near Madame Wood, west of the village of Vermandovillers. For his actions during the fighting around Madame Wood, McCarthy was awarded the Victoria Cross.

In November he became ill and was hospitalised, rejoining his unit on 7 January 1919. Five days later he went to England on leave, where he married Florence Minnie Norville in Somerset on the 25th. McCarthy was invested with his VC by King George V at Buckingham Palace on 12 July 1919. He embarked on HT Runic for Australia on 20 December, arriving in Fremantle, Western Australia on 29 January 1920, and was discharged on 6 August.

The couple settled in Western Australia, moving to Victoria in 1926 where McCarthy worked for H. V. McKay Pty Ltd, makers of the 'Sunshine' harvester. In 1934, due to the Depression, the firm was forced to shed jobs and McCarthy was laid off. The following year he was employed by the Trustees, Executors and Agency Co. Ltd. in Melbourne, remaining with the firm until retirement. In 1956 he attended the centenary celebrations for the VC in London and nine years later travelled to Gallipoli for the fiftieth anniversary of the Anzac landing.

McCarthy died at the Heidelberg Repatriation Hospital in Melbourne on 25 May 1975. He was survived by his wife. Their only child, Lawrence Norville McCarthy, had been killed on 20 May 1945 in Bougainville, while serving as a lance sergeant with 24 Militia Battalion.

His medal group came into the National Collection in 1975. The actual recommendation for Mc Carthy's Mention in Despatches has not survived, although the award is noted in his Croix de Guerre recommendation. It may have been lost when 16 Battalion records were damaged or destroyed when a shell landed on the Battalion rear headquarters on 16 August 1918.