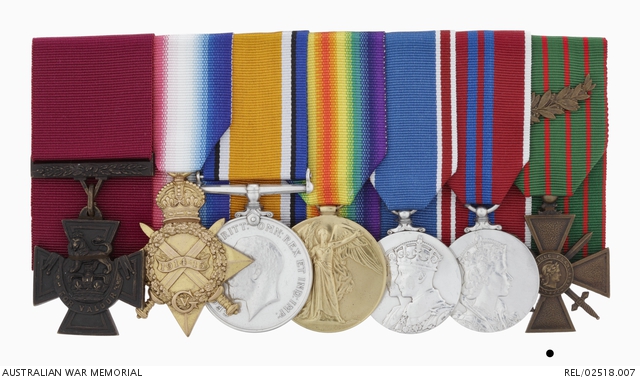 422 Lawrence Dominic McCarthy was born in York, Western Australia, probably in January 1892 though the exact date of his birth is unclear. He served for two and a half years in the 18th Light Horse Regiment prior to the outbreak of the First World War. McCarthy enlisted in the AIF on 16 October 1914 and posted to 16 Battalion. The battalion embarked from Melbourne on 22 December 1914, bound for Egypt, arriving on 3 February 1915. Following training, 16 Bn moved onto Gallipoli late on 25 April. McCarthy was promoted to lance corporal on May 15, corporal on 19 July and sergeant on 1 September. He was evacuated from Gallipoli nine days later due to illness, rejoining his unit on 13 November.

Following Gallipoli, the battalion next saw service in France, arriving in Marseilles on the 7 June 1916. In August, the battalion took part in two failed assaults on Mouquet Farm. McCarthy was awarded the French Croix de Guerre for his services on Gallipoli and in France in February 1917. The recommendation reads, in part:

'This Non-Commissioned Officer is an original member of the 16th Battalion. He has served continuously with the Battalion from its inception to the present time, with a short absence of some three weeks on account of being wounded. He was present at the Landing at Anzac on the 25th April, 1915 and was also present at the Evacuation on the 19/20th December, 1915.
He is a man of great courage and personality, and in the firing line has always proved himself a tower of strength to his Company Commander.
During the period of his services on Gallipoli on numerous occasions he led patrols into No Man's Land and was instrumental in obtaining valuable information. During the fighting on Hill 60 there was a considerable gap between the position occupied by the New Zealanders and the position occupied by this Battalion for a period of some 10 days, until a communication trench was dug. He, in charge of a small patrol party, kept this interval specially patrolled. This exploit demanded a high standard of courage.
His name has been twice brought under notice for gallantry in the field during the fighting before POZIERES in August last. Since then he has again distinguished himself on the occasion of when the enemy raided our trenches at ST ELOI. On that occasion when all the garrison had been withdrawn from the portion of the trenches subjected to a very heavy bombardment and when the German raiding party was observed advancing on our trenches he led a small...' [remainder of recommendation has not survived]

McCarthy was promoted to company sergeant major on 8 March. The following month he suffered a gunshot wound to the left arm in fighting near Bullecourt and evacuated to England for treatment, rejoining his unit on 9 July. While in England he was commission a 2nd lieutenant. He was promoted to lieutenant on 31 October. For his actions during fighting around Madame Wood on 23 August 1918, McCarthy was awarded the Victoria Cross. In November he became ill and was hospitalised, rejoining his unit on 7 January 1919. Five days later he went to England on leave and married Florence Norville in Somerset on the 25th. He embarked for Australia on 20 December, arriving in Fremantle on 29 January 1920, and was discharged on 6 August.

The couple settled in Western Australia, moving to Victoria in 1926 where McCarthy worked for H. V. McKay Pty Ltd. In 1934, due to the Depression, the firm was forced to shed jobs and McCarthy was laid off. The following year he was employed by the Trustees, Executors and Agency Co. Ltd. in Melbourne, remaining with the firm until retirement.

McCarthy died at the Heidelberg Repatriation Hospital in Melbourne on 25 May 1975. He was survived by his wife. Their only child, Lawrence Norville McCarthy, had been killed on 20 May 1945 in Bougainville while serving as a lance sergeant with 24 Battalion (Militia) Regiment.

McCarthy's medal group came into the National Collection in 1975.