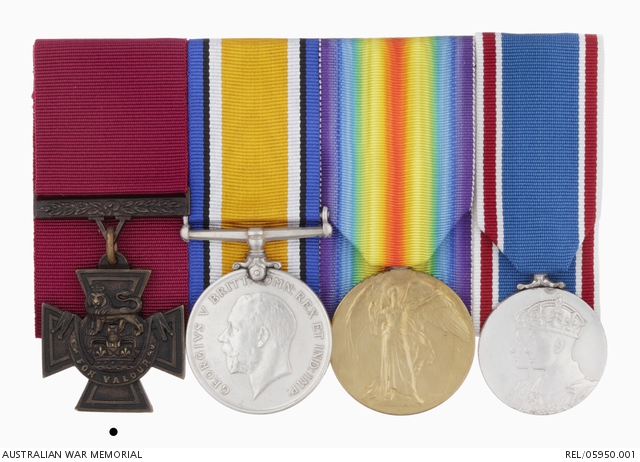 William Matthew Currey was born to William Robert and Mary Ellen (nee Lang) Currey on 19 September 1895 at Wallsend, New South Wales. He was educated at Dudley and Plattsburg Public schools before moving to Sydney and becoming a wire worker. With the outbreak of the First World War, Currey tried twice to enlist, giving a false age as his parent's consent was not forthcoming. Although initially successful at his first attempt, his age was discovered and he was discharged. At his second attempt he managed to serve for over 11 months at the Holsworthy internment camp before his mother intervened.

In mid 1916 he finally gained his parents’ approval to enlist only to fail the medical examination. Following remedial surgery, Currey was finally accepted into the AIF on 9 October 1916 and assigned to the 4th Light Trench Mortar Battery as private 1584. The unit embarked from Sydney aboard HMAT A24 Benalla on 9 November 1916, arriving in England on 9 January 1917. In February, while still in England, Currey transferred to 53 Battalion (53 Bn). He was taken on strength with the battalion on 1 July 1917, on his arrival in France (his service number changing to 1584A), and was assigned to B Company. In September the battalion took part in the battle of Polygon Wood, part of the Third Battle of Ypres.

In July 1918 Currey attended the 14th Australian Infantry Brigade School. He returned to his unit in early August. Later in the month 53 Bn moved up the line in preparation for a major assault near Peronne. Earlier that year the German army, bolstered by troops released from the Eastern Front following the Russian collapse, had launched their Spring Offensives hoping to deliver a decisive blow to the Allied war effort before the Americans could arrive in significant numbers. Despite impressive gains their push was exhausted by the end of May.

In August of 1918 the Allies regained much of the ground won by the Germans, and severely weakened German morale. In one day, during the Battle of Amiens, between six and seven German divisions were almost destroyed. Pushed back to the northern bank of the Somme the Germans were, however, intent on holding the commanding heights around the village of Peronne and nearby Mont St. Quentin.

On 29 August, General Monash ordered the 2nd and 5th Australian Divisions to follow the retreating Germans, capture the river crossings and then sweep through Peronne and capture the heights beyond. The attempt failed when the Germans managed to destroy the bridges, making a successful frontal assault of Peronne, across hundreds of metres of marsh and waterway, impossible.

Following on from advances by the Australian 3rd Division working along the north bank of the river, Monash withdrew the 2nd Division and the 14th Brigade of the 5th Division, including 53 Bn, to positions north of the river. On 31 August the 2nd Division launched an assault on Mont St Quentin, eventually taking the village and the summit two days later.

Early on the morning of 1 September, 53 and 54 Bns of the 14th Brigade were moved to Florina and Prague Trenches, to the west of Peronne. Their task was to capture the area between Mont St Quentin and the Somme. 53 Bn, to the left of 54 Bn, was to clear the area between Mont St Quentin and Peronne and to capture, if the opportunity presented itself, the high ground to the east of the village.

The attack began at 6 am. 53 Bn's advance was soon checked by heavy enemy fire from the northern end of Florina Trench and a nearby copse which was fortified by heavy wire. Fire fights ensued while openings in the wire were found or forged, and Lewis gun crews stood and sprayed covering fire over the wire. Overcoming the wire, the battalion soon captured the trench beyond. The number of casualties sustained caused one of the few surviving officers, Captain W E Smith, to merge A and B Companies, including Currey, into one unit. The men advanced to Anvil Wood, an enemy strong point which had provided stiff resistance to troops of 19 Bn the previous day.

Nearing the wood from the north-west, Smith's unit suffered heavy casualties when it came under close fire from a 77mm German field gun. Currey, in the face of heavy machine gun fire, rushed forward and, firing his Lewis gun from his hip, killed the crew and captured the gun. Later, as the unit moved from the wood, its advance was again checked, this time by a machine gun post. Currey again took the initiative and moved around the flank of the post and captured the gun, killing or wounding many of the crew while the remainder fled.

For a period, intense enemy fire forced the battalion to a standstill near the cemetery, east of Anvil Wood. Later, a party of men from D Company, under Lieutenant W Waite, became isolated when the order to withdraw so that an Allied artillery barrage could be laid, did not, at first, reach the advanced position they had reached near the sugar factory, 450 metres ahead. Currey volunteered to cross the open ground to deliver the order. It took him three attempts to locate the men and deliver the order. His third attempt took place at 3 am on 2 September. He went out as far as he could into No Man’s Land, then stood up and yelled, ‘Waistsy get in!’. Heavy German fire was immediately directed towards the sound of his voice. His respirator was holed and he was gassed, but he returned safely and was followed shortly afterwards by Waite and his men.

By the time the exhausted battalion was relieved at 10pm on the evening of 2 September, Peronne and Mont St Quentin were in the hands of the two Australian Divisions.

For actions during the assault on Peronne and Mont St Quentin between 31 August and 2 September, eight Victoria Crosses were awarded to Australians, including one to Currey. The recommendation for his award reads:

'During the attack on PERONNE on the morning of 1st September 1916 Private CURREY displayed most conspicuous gallantry and daring. During the early stage of the advance the Battalion was suffering heavy casualties from a 77.mm. Field Gun that was firing over sights at very close range. Private CURREY without hesitation rushed forward and despite a withering machine gun fire that was directed on him from either Flank succeeded in capturing the gun single handed after killing the entire crew.
Later, when continuing to advance, an enemy 'Strong Point' containing 30 men and two machine guns was noticed which was holding up the advance of the left Flank. Private CURREY crept around the flank and engaged the flank with a Lewis Gun, causing many casualties. Finally he rushed the post single handed, killing four, wounding two, and taking one prisoner, the survivors running away. It was entirely owing to his gallant conduct, that the situation was relieved, and the advance enabled to continue.
After the final stage of the attack, it was imperative that one of the Companies that had become isolated should be withdrawn. This man at once volunteered to carry the message although the ground to be crossed was very heavily shelled and continuously swept by machine gun fire.
He crossed the shell and bullet swept area three times in the effort to locate the Company, and on one occasion his box respirator was shot through with machine gun bullets, and he was gassed. Nevertheless he remained on duty and after finding the isolated Company delivered the message, and returned with very valuable information from the Company Commander. Owing to the gas poisning [sic] from which he was suffering CURREY had shortly afterwards to be evacuated.
Throughout the operations his striking example of coolness, determination and utter disregard of danger had a most had a most inspiring effect on his comrades and his gallant work contributed largely to our success.'

Currey was evacuated from the line on 3 September suffering from the effects of the gas. On 7 September he was transferred to England for hospital treatment. He saw no further active service. Currey left England for Australia on 8 January 1919, aboard HT Orsova, arriving in Melbourne on 20 February. He was medically discharged from the AIF on 2 April.

In September he gained employment with the NSW Government Railways and soon became an active member of the Australian Labor Party. At St Saviour's Anglican Church Punchbowl, on 10 April 1920, he married Emma Davies. From 1930 to 1932 he served in the militia with the 45th Battalion (St. George Regiment). Following the outbreak of the Second World War, served for two years with the Australian Instructional Corps. Not content to sit idle during another war, Currey resigned his position with the railways and stood as the Labor candidate for Kogarah in the NSW Legislative Assembly.

On 10 May 1941, he became the first VC winner to enter the NSW Government. Re-elected on 27 May 1944 and again on 3 May 1947, Currey was a strong advocate for the support of returned servicemen. Hoping to gain greater representation for ex-soldiers he encouraged the politicisation of the RSL declaring that: '...soldiers must be prepared to play their part in the political life of Australia.' He also agitated for the abolition of the Legislative Council.

Currey collapsed in the Assembly Chamber on 27 April 1948 and died three days later from a heart related illness. He was cremated following a service at St Stephen's Church on 3 May 1948 and his ashes interred in Woronora Cemetery. In attendance were four VC recipients. He was survived by his wife and two daughters. His death, according to his official service record, was a result of his war service.

In a tribute following his death, the Premier of New South Wales, Mr James McGirr, told Parliament: 'If the fires of his enthusiasm for service, both on grim battlefields in war and on many fronts in peace, had burned less fiercely he might still be with us today.' The Opposition Leader, Sir Vernon Treatt, mentioned the 'spirit of comradeship' that Currey had brought into the House.

Currey’s medal group came into the Memorial's National Collection in 1981.