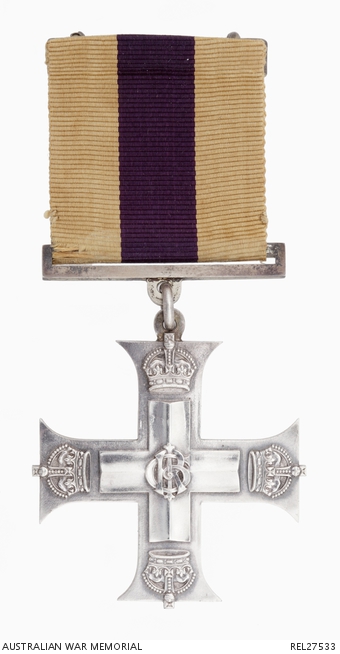 Associated with the service of Lieutenant John William Pidcock. Pidcock was born in Tatham NSW on 24 June 1893 and was a 22 year old clerk when he enlisted as a driver in the 1st Field Ambulance on 1 September 1914. On 20 October he embarked from Sydney for overseas service aboard HMAT Euripides. On 4 February 1915 Pidcock rank was changed to private. He landed with the 1st Field Ambulance on Gallipoli at about 9am on the morning of 25 April.

In September Pidcock spent two weeks in hospital on the island of Mudros suffering gastritis before returning to his unit. However, he was not with them long as he was admitted to the Australian 3rd General Hospital on 12 October with synovitis of the knee. This condition resulted in Pidcock having to be invalided to England aboard the Hospital Ship Aquitania arriving in England on 25 November. Pidcock returned to the Mediterranean the following year and was transferred to the 10th Field Artillery Brigade (FAB) on 9 May 1916. On 5 June he embarked for France, arriving a week later.

Serving on the Western Front with the 10th FAB, Pidcock was promoted to temporary bombardier on 19 February 1917 and bombardier on 27 February. He was selected to attend the Royal Artillery Cadet School of Instruction at St John's Wood and arrived there on 9 June. After completing his course of instruction, Pidcock qualified for a commission in the Artillery and was appointed second lieutenant on 3 November.

He returned to France on 16 November and joined the 11th FAB in the field on 26 November. Pidcock was promoted to lieutenant on 3 February 1918. On 5 April he was wounded in action and died from his wounds at the 3rd Canadian Stationary Hospital that day. Pidcock was buried at Doullens Communal Cemetery Extension No. 1 on 7 April.

Pidcock was posthumously awarded this Military Cross for the action in which he was mortally wounded. His recommendation reads: 'For conspicuous gallantry during the attack on the 5th April 1918 against our positions opposite DERNANCOURT and ALBERT. The heavy and accurate fire directed against this Battery cut all wires and interrupted communications between the Control Station and guns. Lieut. PIDCOCK personally carried orders to the guns from the Control Station for two hours under the continued heavy fire until wounded. The gallant service and devotion to duty of this young Officer was of vital importance to his Battery and a splendid example to his men during a very strenuous and critical period. His work throughout has been excellent.'