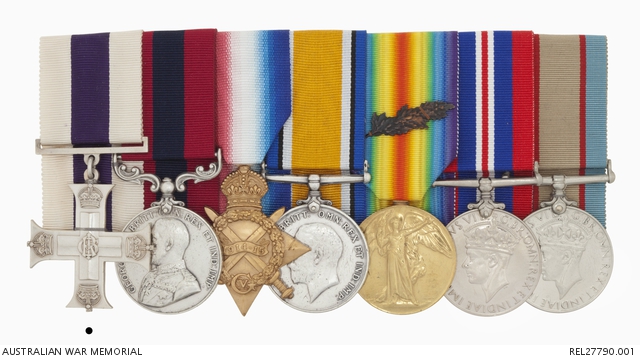 William Charles Scurry was born at Carlton, Victoria in 1895. He was serving in the militia as a lieutenant in 58 Infantry Battalion (Essendon Rifles) and working as an architectural modeller when he enlisted in the AIF on 19 July 1915. After initial training he was assigned to 7 Battalion as a private with the service number 2668. He embarked at Melbourne with the 8th Reinforcements to the battalion aboard HMAT Anchises (A68) on 26 August 1915.
Scurry joined his unit at Gallipoli on 11 November. He was promoted to lance corporal on 4 December. Once the rumours of an evacuation from the peninsula proved accurate, Scurry began contemplating the consequences of a Turkish attack during such a withdrawal, and the necessity of maintaining the illusion that the trenches were still occupied. His concerns prompted him to design a drip (or ‘pop off’) rifle, which was a delayed action device for firing a rifle by means of weights operated through water escaping from one tin into another.
Writing about his invention in 1930, Scurry stated, '[v]ery early in the experiments I came to a stop for want of water. The only supply I has was my own ration, which, in those thirsty times, was one pint a day. Permission to go to the beach for salt water was refused, and I was about to drop the affair in despair, when an old school mate, Pte A H Lawrence, also of the 7th, gave me a whole quart. He had drawn a double ration ... on condition that he drew none the next day. Just think of a thirsty man going without for another day to give his issue to a cobber, who was apparently making a fool of himself with a cranky looking contraption made of old tins and bits of string.'
For three weeks before 19 December 1915 troops quietly left Gallipoli. Drip rifles were fixed in trenches on the night of 19-20 December. Scurry remained with 7 Battalion’s rear party, which was one of several parties detailed to fill the water tins at the last moment. The evacuation of Gallipoli was a resounding success. For his contribution Scurry was awarded the Distinguished Conduct Medal and was mentioned in despatches.
In Egypt, Scurry was promoted to acting sergeant on 10 January 1916, which became substantive two weeks later. Commissioned as a second lieutenant on 20 February 1916 he was transferred to 59 Battalion several days later. He was then transferred to 58 Battalion in March.

Scurry was promoted to lieutenant on 1 June 1916. His battalion was posted to France later that month. He was promoted to temporary captain on 5 July 1916, and at the request of his brigade commander, Brigadier General H E Elliott, was seconded for duty with the newly formed 15 Australian Light Trench Mortar Battery.

This unit first saw action at the disastrous battle of Fromelles. Although Australian units suffered horrendous casualties during this engagement, the eight mortars under Scurry’s command were utilized effectively.

Scurry was forced to relinquish his temporary rank when he was wounded at Petillon on 3 September 1916. He was examining the fuse on a German ‘rum jar’ minenwerfer projectile when the device exploded, injuring him in the chest and face and shattering his right index finger, which was later amputated. His right eye was also blinded by metal fragments. Several of the fragments could not be removed and caused him chronic pain throughout the rest of his life.

For his performance with 15 Light Trench Mortar Battery Scurry was awarded the Military Cross (MC) on 12 October 1916. He was promoted to the substantive rank of captain on 20 December.

The recommendation for the MC reads: ‘This Officer served on the Peninsula as an N.C.O. with the 7th Battalion with conspicuous courage and ability. Since he has been in command of the Light Trench Mortar Battery of this Brigade at Petillon July-September 1916 by his courage, energy and ability, he worked a complete revolution on the feelings of the Infantry towards his guns. Instead of, as was the case in the beginning, these mortars being disliked as liable to draw unnecessary fire upon the Infantry they are now sought out by the Infantry as an aid to our snipers in silencing troublesome machine guns and snipers as well as damaging his trenches and obstacles. From the outset Capt. Scurry set a fine example of self-sacrificing zeal and enthusiasm in regards to the employment of the mortars under him until wounded.’

Scurry rejoined 58 Battalion from hospital on 3 May 1917. He was again seconded to 15 Light Trench Mortar Battery in the same month. He was then detached to 1 Anzac School of Instruction at Aveluy, France as an instructor in June. Determined to remain close to the action, Scurry returned to the line in between courses, a practice he continued from May 1918 when he became chief instructor. Scurry was engaged in this role when the Armistice was signed in November 1918. He rejoined 58 Battalion in December, leaving for Australia in January.

Scurry arrived home in May 1919. He returned to work as an architectural modeller, and was married in January 1920. In September of the same year the eyesight in his left eye began to fail. In 1923 he was forced to give up his occupation. He became an orchardist at Silvan, Victoria, but was ultimately forced to give up all physical work in order to preserve his remaining eyesight.

During the 1930s, the Australian War Museum (as the War Memorial was then known) was located in Melbourne. Scurry visited and assembled an example drip rifle for its displays. The item was then transferred to display in the War Memorial in Canberra when it opened in 1941.

Scurry enlisted in the Citizen Military Force in September 1940 with the service number V5985 and the substantive rank of captain. He was posted to 17 Garrison Battalion. Scurry was promoted to major in September 1942 and appointed to the post of commandant at No. 4 Tatura Internment Camp in July 1944. He remained in this position until the end of the war, whereupon he was transferred to the Reserve of Officers in October 1945. Scurry died in 1963.