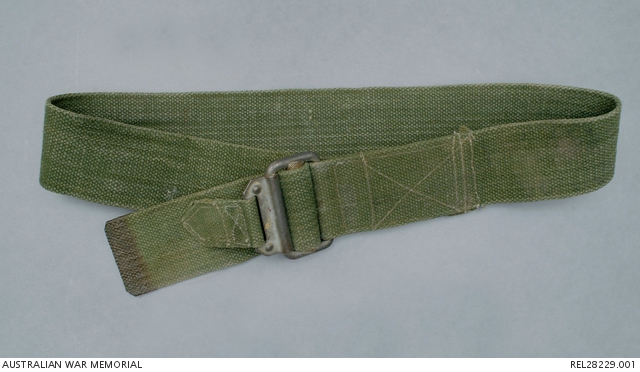 Jungle green cotton webbing belt with a stitched in square quick release buckle, with a sliding knurled rod in its centre. The other end of the belt has been burnt to prevent it from fraying.

Associated with the service of 235080 Robert John Fletcher. Bob Fletcher was born in Cowra in 1932, and entered the Royal Military College, Duntroon in February 1951. He graduated in December 1954, and served with 2 RAR in Malaya between 1955 and 1957 commanding rifle and mortar platoons. Belts such as this were produced by many Australian soldiers to replace the standard Pattern 1944 webbing belt supplied for service in Malaya. They were easily made from a shortened length of British supply parachute harness, the quick release buckle supplied on the harness being retained. The main advantages of such a belt were that it could be released very quickly, and that it allowed basic pouches and waterbottles to be carried low on the hips instead of around the waist.