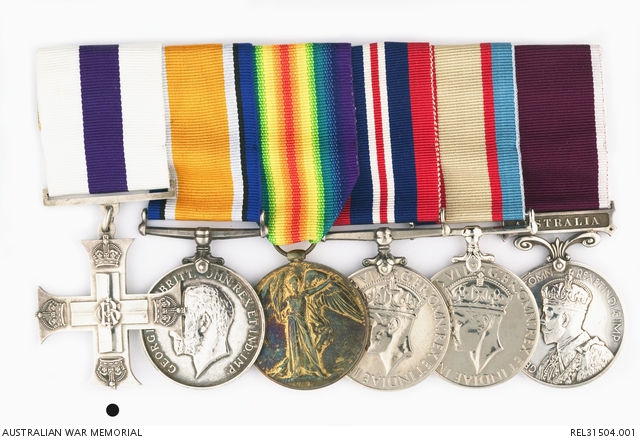 Awarded to Warrant Officer 1 George Snowdon who served in both the First and Second World Wars. Snowdon was born in England in 1886. He enlisted in Victoria on 6 May 1916 and was assigned to 7 Field Artillery Brigade Headquarters, with the service number 18416. He served as a specialist armament artificer in France and Belgium and was awarded a Military Cross for his actions. The recommendation for the award reads, 'Warrant Officer Snowdon, Armament Artificer, 7th Field Artillery Brigade, has served with this unit since its formation. During this time, and especially since the brigade arrived in France, he has displayed conspicuous courage and devotion to duty. During the operations at Ploegsteert and Messines in May, June, July and August, and again during the operations in front of Ypres, this Warrant Officer was the means of, on many occasions, retaining guns in action which would otherwise have been lost to the Batteries concerned. Repairs were continually executed under the most trying and dangerous conditions, and the movement between batteries was often carried out whilst a heavy bombardment was taking place. These repairs were many times executed at night, and, whenever called upon, no matter how dangerous the conditions, Warrant Officer Snowdon performed his duties without the slightest regard for his own personal safety. I consider this Warrant Officer's work, both from a technical point of view, and from the point of view of devotion to duty, of an exceptionally high order'. Later in the war Snowdon transferred to Australian Army Ordinance Corps and shortly after this he became a permanent member of the Australian Military Forces (AMF) with the service number 1204. Snowdon was commissioned in the 1930s and on the outbreak of the Second World War Snowdon was posted to Army Headquarters in Melbourne with the rank of captain and the service number was changed to VP7586. He was discharged on 30 November 1946.