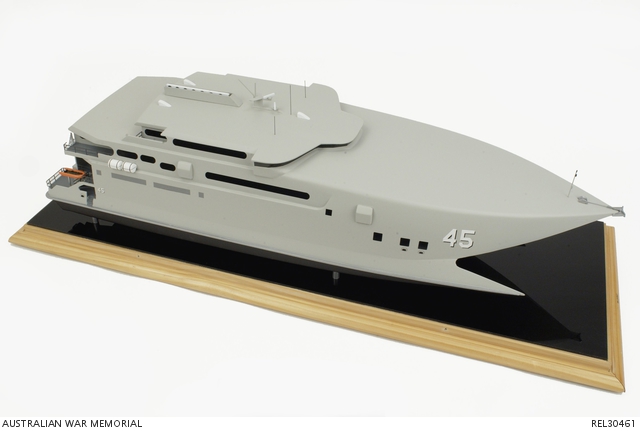 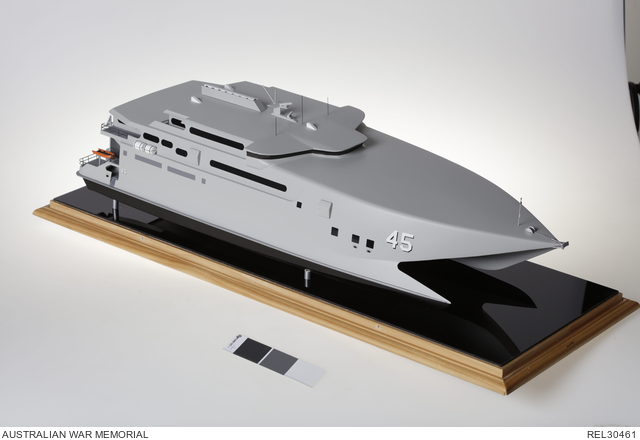 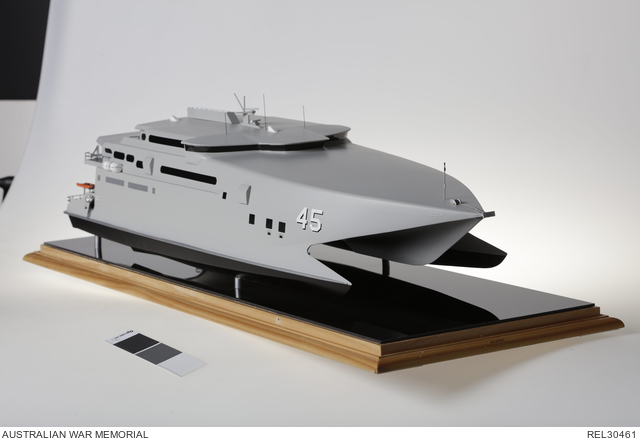 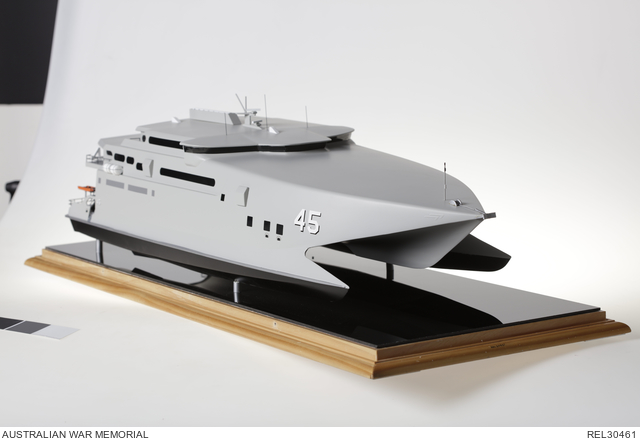 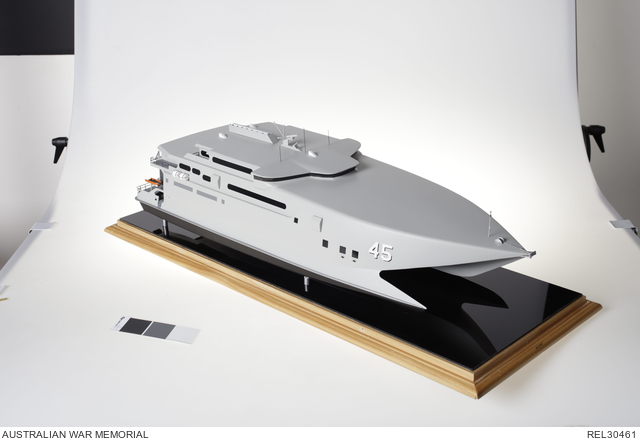 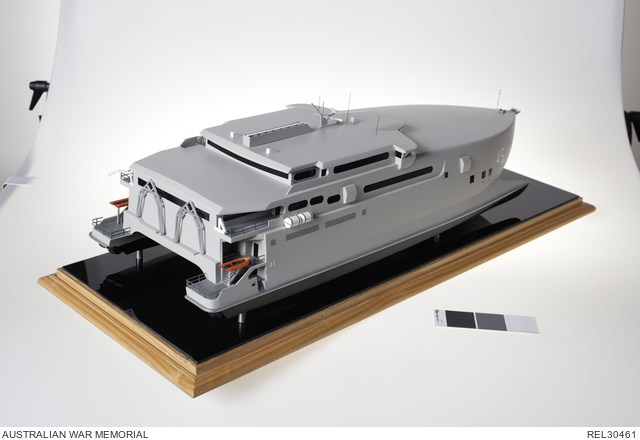 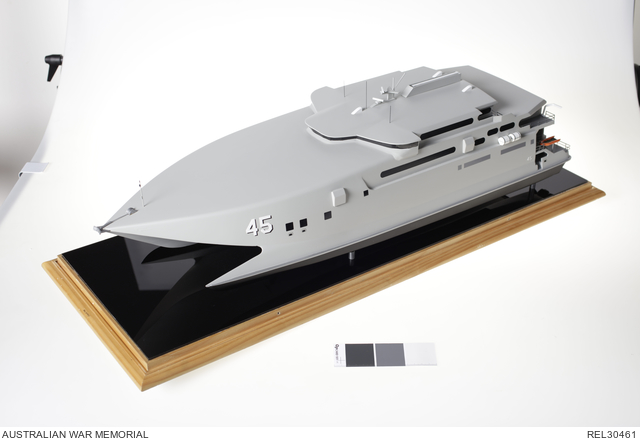 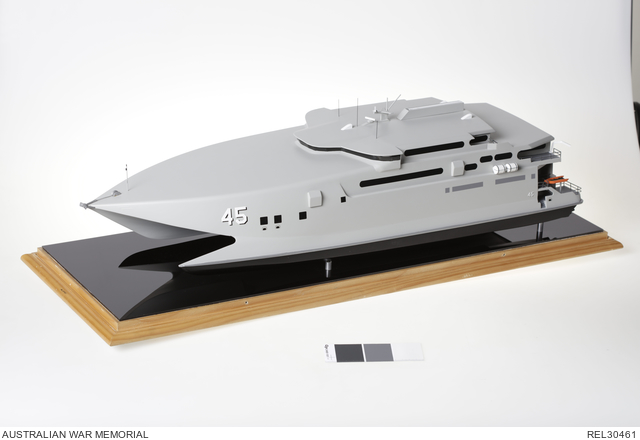 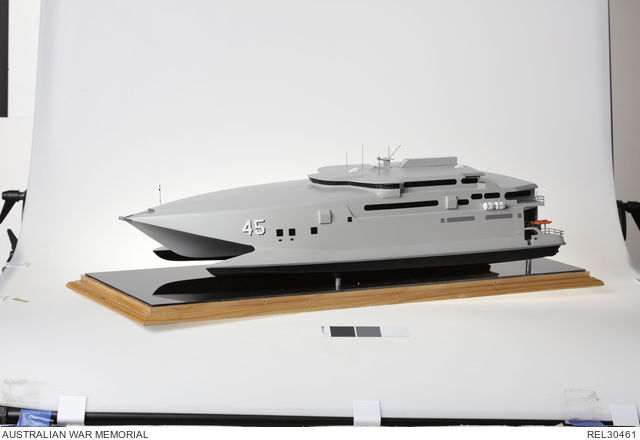 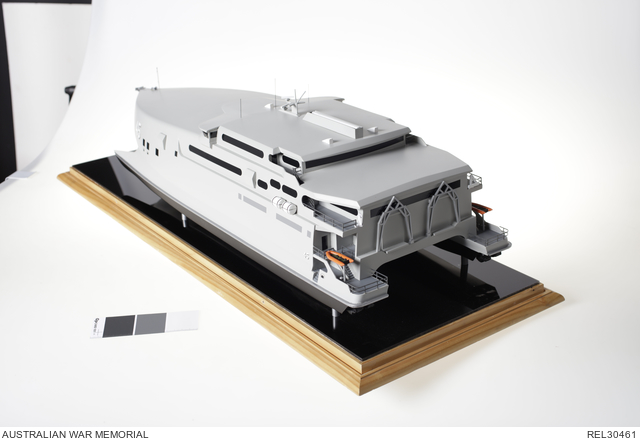 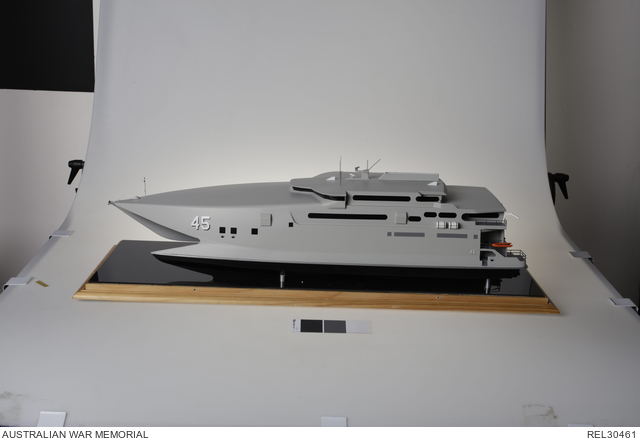 Catamaran model in 1:100 scale made of timber, plastic, wire and other materials. Painted sea grey with white details. Displayed in a clear perspex case with timber base.

Incat Designs catamaran Number 045 was leased as HMAS 'Jervis Bay' by the Royal Australian Navy, specifically to provide sealift capability for two years for the Australian Defence forces. It made possible deployment of troops and supplies to East Timor in support of the INTERFET operation. An 86 metre wavepiercing catamaran built for commercial service, it completed its mission with the RAN following its two year charter, completing 107 trips between Darwin and Dili transporting personnel and equipment as part of the United Nations Transitional Administration in East Timor (UNTAET). It carried 20,000 passengers and 430 military vehicles, and shipped over 5,600 tons of equipment. The Maritime Commander, Rear Admiral Geoff Smith AM RAN, paid tribute to HMAS Jervis Bay saying it "was precisely the vessel we wanted in the East Timor crisis, we needed to transport personnel quickly, reliably and in large numbers". Chief of Navy, Vice Admiral David Shackleton said HMAS Jervis Bay, affectionately referred to as the 'Dili Express', served Australia well and successfully filled a shortfall in the Navy's operational capability. He said the vessel had been extensively trialed and assessed during its service and the RAN has obtained much valuable data for use in the future. The advent of the Timor crisis gave rise to an immediate need to transport large numbers of troops and equipment quickly. Travelling at 43 knots fully loaded and 48 knots lightship, HMAS Jervis Bay usually crossed between Darwin and Dili in approximately 11 hours. It is said to have 'stunned' US 7th Fleet personnel with its capability during East Timor peacekeeping operations. This model is presumed to be a builder's model made for or by Incat when the vessel was built, and following its purchase by the RAN, repainted in the scheme and markings it bore during its lease by the RAN.