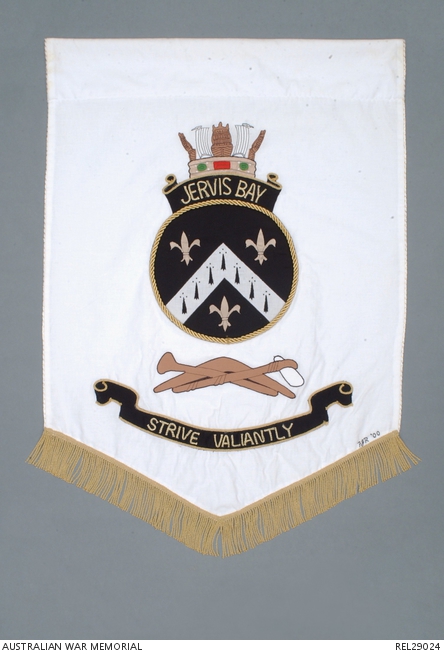 White cotton banner backed with white synthetic fabric. Front of banner bears the ship's badge of HMAS Jervis Bay. The entire badge has been appliqued to the banner using machine zig zag stitch. Badge shows a black disc with an white ermine chevron between three gold fleur-de-lis. It is edged with gold curtain cord 'twisted rope' which has been glued into place and further secured by gold metallic thread. The shiny gold fabric fluer-de-lis have been machine appliqued as has the white chevron. The ermine 'tails' have been hand embroidered in black. Above the central badge is a black machine appliqued scroll, with the top edged in narrower gold cord, also attached with glue and bullion gold thread. The scroll bears the words 'JERVIS BAY' in flat bullion braid, attached with glue. Above the name is a machine appliqued naval crown. The base of the crown is made of shiny gold fabric and has hand embroidered green, red and white jewels in satin and buttonhole stitch. The sails and ships' sterns that form the top of the crown are in brown and white fabric. The details on them have been stemstiched in black. Beneath the badge are the standard three crossed Aboriginal weapons in brown and white fabric appliqued in black machine zig zag. Underneath this is a black appliqued scroll partially edged in narrow gold cord, which has been glued into place and secured with gold bullion thread. The centre of the scroll bears, glued on in flat gold braid, the ship's motto 'STRIVE VALIANTLY'. The sides of the banner are edged in rolled white cotton with diagonal gold metallic stripes. Top of banner has been folded to make a pocket 11.5 cm deep to take a pole. The lower triangular shaped edge has a 7.5 cm deep gold cotton fringe. In the lower right corner the maker has embroidered her initials and the year in black 'FJR '00'.

Banner made by Mrs F J Rixon, wife of the then Commanding Officer (CO) of HMAS Jervis Bay. The banner was carried by the ship on her runs between Dili and Darwin in support of Australian troops serving in East Timor with UNTAET between 1999-2001. HMAS Jervis Bay was commissioned in May 1999 for logistics operations between Australia and East Timor and was affectionately referred to as the 'Dili Express'. She was retired in 2001 after a two year lease by the Royal Australian Navy from the ships manufacturer INCAT, based in Hobart, Tasmania. During her service with the RAN, HMAS Jervis Bay, (hull number 045), completed 107 trips between Darwin and Dili covering some 100,000 nautical miles, carried 20,000 passengers and 430 military vehicles. In addition, an impressive 5,600 tonnes of stores were shipped. Travelling at 43 knots fully loaded and 48 knots lightship, HMAS Jervis Bay usually crossed between Darwin and Dili in approximately 11 hours.