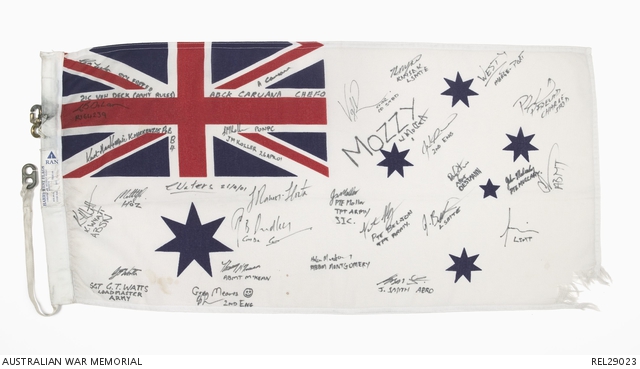 White Royal Australian Navy ensign. The flag has some small stains and the bottom right corner of flag is torn and damaged. The hoist has dark stains from the attached Inglefield clip.

White Royal Australian Navy ensign from the HMAS Jervis Bay and signed by crew after her last run to Dili, East Timor (Timor Leste) from Darwin on 26 April 2001.

The HMAS Jervis Bay was commissioned in May 1999 for logistics operations between Australia and East Timor and was affectionately referred to as the 'Dili Express'. She was retired in 2001 after a two year lease by the Royal Australian Navy from the ships manufacturer INCAT, based in Hobart, Tasmania.

During her service with the RAN, the HMAS Jervis Bay, (hull number 045), completed 107 trips between Darwin and Dili covering some 100,000 nautical miles, carried 20,000 passengers and 430 military vehicles. In addition, an impressive 5,600 tonnes of stores were shipped. Travelling at 43 knots fully loaded and 48 knots lightship, HMAS Jervis Bay usually crossed between Darwin and Dilli in approximately 11 hours.

The flag also carries the signature of In 2002, after the independence of East Timor (now called the Democratic Republic of Timor Leste) Ramos-Horta became the first Foreign Minister. In 2006 he became acting Prime Minister and in 2007 he became the second President of Timor Leste.