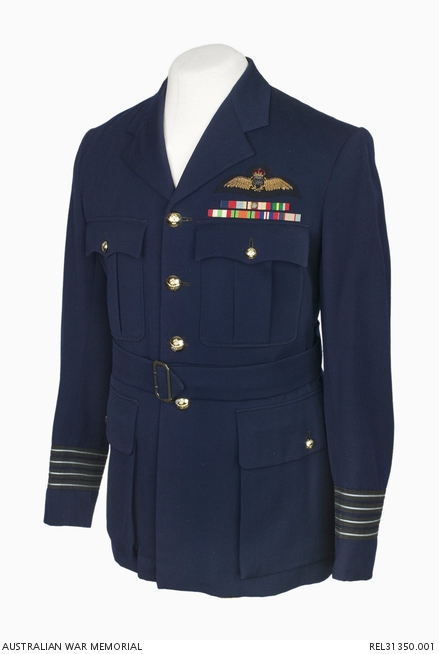 RAAF officer's blue wool winter service dress tunic with a pair of pleated breast patch pockets and a pair of expanding patch waist pockets. The pockets have flaps secured by gilt metal RAAF buttons. The flaps on the breast pockets have three points, while those at the waist are square. Above the left breast pocket is a gold bullion embroidered pilots brevet and ribbon bars representing the 1939-45 Star, Africa Star with silver rosette denoting the North Africa 1942-43 clasp, Pacific Star, Italy Star, Defence Medal, British War Medal 1939-45 and Australia Service Medal. Below the right breast pocket is a small inset pocket. Group captain rank insignia is worn on each lower sleeve. The tunic is fastened by four large gilt metal RAAF buttons, and belted at the waist. The self fabric belt has a metal buckle and is buttoned to the rear of the tunic with small leather loops.

Worn by O368 Group Captain Ian Lindsay Campbell, born on 7 October 1914 in Elwood, Victoria. Campbell joined the RAAF in 1937 and served as a wireless operator and air gunner before qualifying as a pilot. He was commissioned pilot officer in July 1938, and promoted to flying officer in June 1939. At the outbreak of the Second World War Campbell was posted to 12 Squadron, and then in 1940 to 13 Squadron, based in Darwin. He was attached for a short time to the Royal Air Force (RAF) and served in the Middle East with 203 Squadron, RAF. In February 1942 Campbell was posted to 459 Squadron, RAAF, and promoted to squadron leader in April. On 16 October he was promoted to acting wing commander and became commanding officer of 454 Squadron, RAAF, based at Qaiyara, Iraq, and equipped with Blenheim and Baltimore light bombers. Campbell returned to Australia where he became commanding officer of 14 Squadron, RAAF, in March 1944, and RAAF Station Canberra in November. From 1949-51 he was posted to RAAF Station Mallela, South Australia and operated aircraft in support of the weapons research establishment at Salisbury. Campbell returned to the Middle East on exchange duty with the RAF in the early 1950s. In 1956 he was posted to the School of Land Air Warfare. Campbell was placed in command of RAAF Station Richmond in 1960. After 31 years service he retired in 1964 with the rank of group captain.