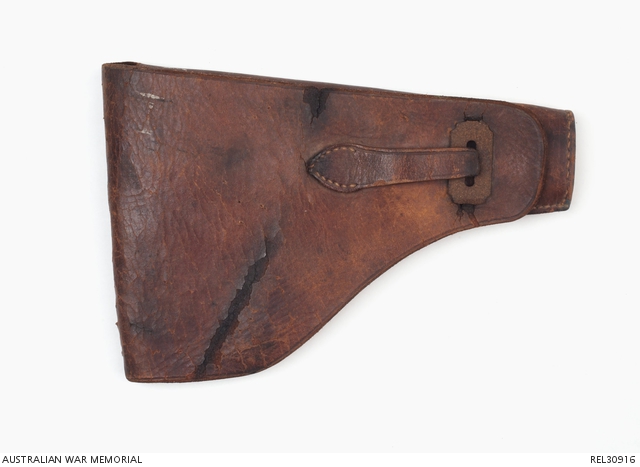 Small leather pistol holster used by 2nd Lieutenant P G Neeson. The holster has a large flap which would have been closed by a 'D' ring and tongue fastening, the ring of which is now missing. The flap is marked internally in black and blue ink with a variety of inscriptions, most of which are illegible. Beneath the flap on the front of the holster is a small pocket to hold a spare magazine for the pistol. A pair of steel 'D' rings on leather straps are attached the reverse for suspension. One of these rings and its strap are completely detached and are stored inside the holster.

Born in 1888, Percival Gorman Neeson was a languages teacher working in Grafton before he enlisted in the AIF in August 1916. Commissioned as a 2nd lieutenant in 26 Infantry Battalion, he sailed for France on the troopship 'Commonwealth' (A73) with the 10th Reinforcements to the unit in March 1916. Neeson quickly became known to his men as 'Granny', due to his interest in their welfare, but was known to his fellow officers and superiors as 'Gordon'. Within four months of his departure from Australia, he was involved in the savage fighting at Pozieres, on the Somme, and on 29 July he was severely wounded in the head while attacking enemy positions. For his gallantry in this action he was recommended for the Military Cross (MC), but his wound was so serious that he was not initially expected to survive. Evacuated to the Duchess of Westminster's Hospital in Paris, and thence to England, suffering from partial paralysis of the right arm and hand, Neeson was operated on by the King's surgeon, who removed fragments of skull from his brain and inserted a silver plate into the hole in his skull. He made a full recovery in time to receive his award of the MC personally from the King on 4 November 1916. Despite his recovery, Neeson was not considered fit for further military service, and he was repatriated to Australia in 1917, returning to his pre war occupation. Known in later life (as he had been in the army) as Gordon Neeson, he died in 1958. The holster appears to be for a small automatic 'pocket' pistol, and may possibly be a German item collected as a souvenir in France.