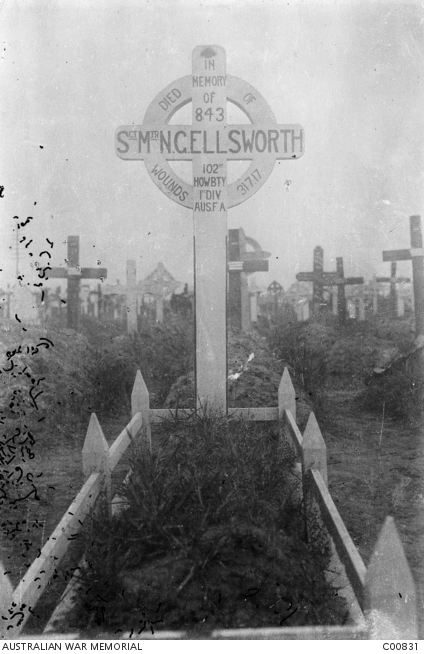 Norman Griffiths Ellsworth was born at Creswick, Victoria in 1886. He was educated at the Christ Church Grammar School in South Yarra, Melbourne and worked as a government employee with the Royal Mint. He had nine years of service with the militia, having spent time with 10th Light Horse and 5th Field Artillery prior to his enlistment in the Australian ImperialI Force on 19 August 1914. Ellsworth joined the 4th Battery, 2nd Field Artillery Brigade and departed Sydney on board HMAT Shropshire on 20 October 1914. He was part of the crew that took the first gun ashore at Gallipoli on 25 April 1915, and went on to serve on the Western Front in France and Belgium. He was transferred to the 21st Field Artillery Brigade on 30 December 1916, when he was also promoted to battery sergeant major. He also spent time with the 102nd and 116th Howitzer Batteries. Norman Ellsworth died of wounds received at Zillebeke in Belgium on 31 July 1917 and is buried at The Huts Cemetery, Belgium.