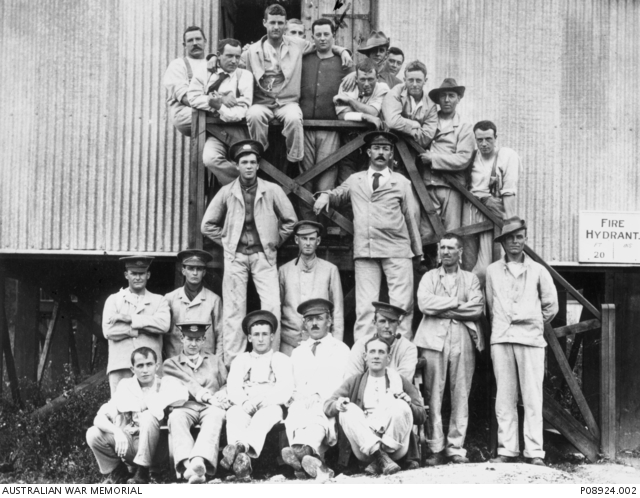 George Alexander Hugh Murray was born at Warracknabeal, Victoria, in 1894. At the time the First World War broke out Murray was employed as a farm hand. He had previously spent three-and-a-half years with the 73rd Infantry (Victorian Rangers) of the Citizens' Forces. As a 20-year-old, Murray required and was granted written parental permission to enlist on 8 October 1914 with the Australian Imperial Force. He departed Melbourne with the 14th Infantry Battalion aboard HMAT Berrima on 22 December 1914.

On the afternoon of 25 April 1915, Murray landed on Gallipoli with his battalion, and two days later was wounded in action, sustaining a severe gunshot wound to his left knee. Sent to England for recovery, his letters home to family noted that some of the Gallipoli landing survivors applied for staff jobs because they were scared to return to the peninsula. He notes that despite being offered one such job himself he declined because of his sense of duty. Murray rejoined his unit in March 1916 as it went to the Western Front, taking part in the battle at Pozières in August. The following January he was transferred to the newly formed 4th Division Salvage Company. A few months later his younger brother William was killed while delivering a message at Lagnicourt. The death of his brother and his own personal experiences on the Western Front influenced Murray's efforts to dissuade his sister from enlisting as a nurse, writing in one of his letters that "any one over here who has been through it never wishes to bring another if he can help it to put up with the hardships of this life." He returned to the 14th Battalion in October.

Murray was killed at Hébuterne the following year on 30 March 1918, one of the many Australians who died repelling the Germans' repeated attempts to outflank the Australian forces. Buried nearby, Murray's body was reinterred after the Armistice at Gommecourt Wood New Cemetery in Fonquevillers. His brother's body was never found and so he is commemorated on the Villers-Bretonneux Memorial for those soldiers with no known grave. Upon the request of their parents, George Murray's headstone at Gommecourt also includes an inscription for William Murray, stating that the brothers are "in death undivided."