Each evening between sunset and sunrise names from the Australian War Memorial’s Roll of Honour are projected onto the façade of the Hall of Memory (the dome).  The projections are a tribute to those who made the ultimate sacrifice.

The Roll of Honour lists the 103,000 men and women from Australia’s defence forces who have died in the service of our nation. This nightly commemorative event, which was initially delivered as part of the Memorial’s program to mark the centenary of the First World War, has been extended to include the names of all Australians who have died during, or as a result of, war service or war-like operations.

Individual names are projected in groups by conflict or operation. Each name is projected once every 3 months. 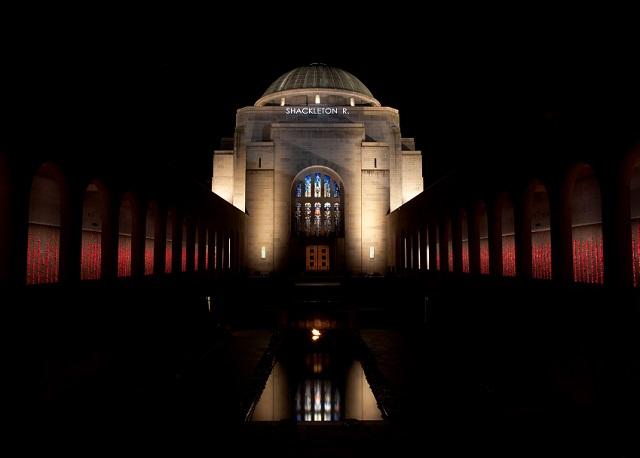 Name from the Roll of Honour projected onto the Memorial building.

Search the Roll of Honour to help you find out when a particular person’s name will be projected. This site provides the estimated date and time at which the name will be displayed.

If you are planning a trip to the Memorial to view the projection of a specific name, please be sure to check the date and time in advance. These dates and times are estimates.  The actual time of projection could also change as a result of weather, twilight and other factors, so it is advisable to check closer to the date. In the rare event of a temporary loss of electrical power, the names scheduled for display in that period will not appear until the next time listed. Due to construction hoardings as part of the Development Project, the ideal viewing area for the Roll of Honour projections is from Anzac Parade.