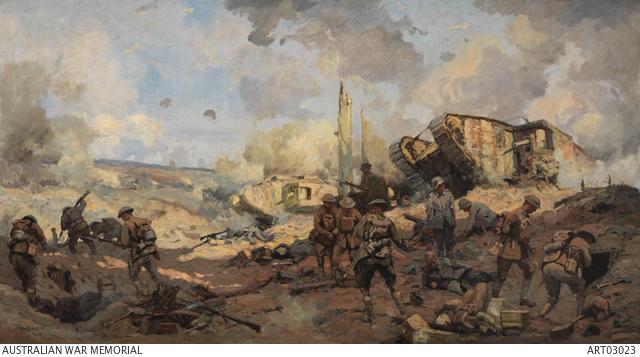 By 1918 artillery firing shrapnel, high-explosive, gas or smoke shells had come to dominate the battlefield and was causing the most casualties. The use of the now numerous guns and howitzers of various sizes had evolved into a science.

In attack, the artillery could provide a creeping barrage, a curtain of fire for the infantry to advance behind, as well as counter-battery fire to neutralise the enemy’s guns.

Gas was widely used and equally despised by both sides.

Aircraft, whose main task was observation, also undertook bombing, interception, and ground attacks. The ordinary infantryman was now trained in a variety of arms, and many more automatic weapons were in use; wherever possible, each platoon now had two Lewis light machine-guns.