The Issue of Conscription 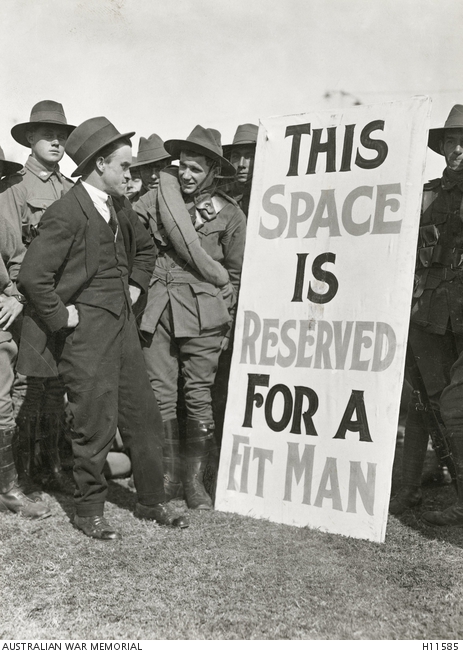 Australian soldiers on a recruiting drive show a sign to a civilian to help him decide.

The second and last Australian referendum on the divisive issue of conscription was held in December 1917. This movement for conscription was defeated by a larger majority than in the first referendum of October 1916. There continued to be many recruiting drives throughout 1918, although numbers of volunteers steadily decreased, and the debate surrounding the issue remained a bitter and emotional fight.

By 1918, many wounded men had already been sent back to Australia from the front. Their visible wounds, and talk of conditions on the Western Front, may have acted as a deterrent to some of those who had not yet enlisted. Yet despite the feeling of war weariness, a few thousand Australian men enlisted in 1918, primarily because they had reached the age of 18 or they satisfied the necessary physical requirements.

Private Charles Carpenter, 23rd General Service Reinforcements, enlisted in August 1918, despite the fact that his two brothers pleaded with him not to enlist. Both brothers had already been in service on the Western Front, and one had lost a leg and the other had been badly gassed. As it turned out, much to his dismay, Carpenter never saw active service (apart from having his nose broken on the voyage over!). However, at the same time, he was understandably relieved that he wouldn't have to face what his brothers had.

Conscription and the Front 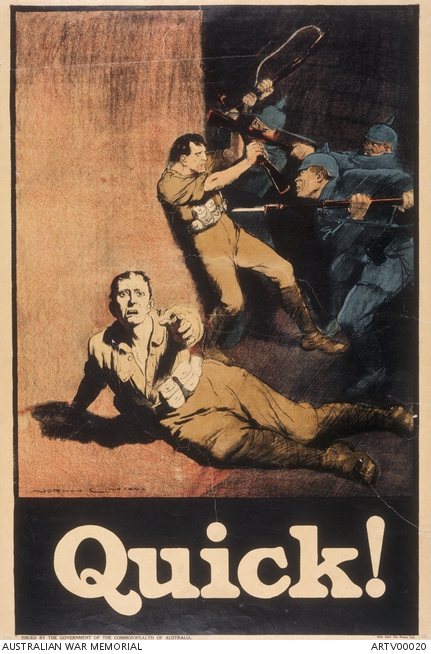 An Australian recruitment poster from 1918, by Norman Lindsay. 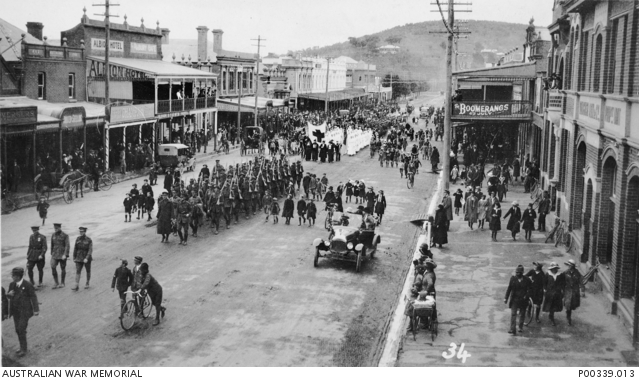 A recruiting drive in Albury, NSW, 1918. This may have been one of the "March to Freedom" recruiting drives that started in one town and passed through many, trying to collect recruits on the way.

The new generation of 1918 recruits were serving alongside many veterans of the war. Because of the decreasing numbers of Australian volunteers in 1918 (despite the gradual lowering of entry restrictions), many of the men who fought in Australian divisions had been wounded, evacuated, and later sent back to the front. A few existing Australian battalions had to be disbanded because of the lack of replacements.

if we are to maintain effective units further amalgamation of battalions will have to take place and certain famous battalions will go out of existence Reinforcements simply don't come and one can't maintain an effective fighting unit on paper alone one can only go on and see one's men, tired and weary as they are, going on indomitably and carrying the burdens of these wasters as well as their own.

The reality of the number of original recruits that had been killed or wounded by 1918 was illustrated by Gunner J.R. Armitage- a new recruit at the beginning of the year- in a story he wrote on 10 April at a new camp at Portnoyelles, France:

A most unfortunate thing happened while entering our names. One of our reinforcements was named Flannagan, a rather delicate and very young boy. S.M. McMurray, the battery sergeant major, a very decent chap, commenting on the name, said rather jokingly "I don't want to scare you or anything like that, but its rather a coincidence, a namesake of yours came to the battery only a fortnight ago, and he was killed a few days ago!" It turned out to be the young reinforcement's brother. The poor kid was shattered and the S.M. horrified at what he had done. The incident made the rest of us realise we had arrived at the war.

Some men who had been serving for a long time felt resentful that volunteers were not forthcoming, and felt that they had been betrayed by those men in Australia who had chosen not to enlist. Private Ronald Simpson wrote in October 1918:

There is a good few 1914 men leaving here for home, the majority say they will never come back and I don't blame them, it's time some of the loafers came to do a bit.

However, others believed that the strength of the Australian Corps lay in the fact that every man had volunteered to be there, and that this psychological distinction had an important influence on morale. All German males between the ages of 17 and 45 had a military obligation under the German system of conscription, and some felt this may have contributed to the Germans' eventual loss in 1918 because "their heart wasn't in it". Lance Corporal A.H. McKibbin wrote in October 1918:

I rejoice every time I remember that neither of my brothers came here to go through what most of us have.