In France in 1918, there were many names for the Germans, such as "Fritz", "Hun", "Boche" and "Jerry". Negative perceptions of the Germans were fuelled by propaganda that encouraged Australians to think of all Germans as brutal and ruthless animals- a threat to the Australian way of life and to every family.

Yet in reality the German soldiers were not as different as people were led to believe. The Germans all had families, they all lost loved ones during the war, and by 1918, they were just as war weary as many of the Allied troops. As for their brutality, there are several examples of Australians and other Allied troops committing their own atrocities. Attitudes towards the Germans among Australian soldiers ranged from seeing them purely as the evil "enemy" who must be stopped, to identifying with the common situation that all soldiers found themselves in, regardless of nationality.

Not surprisingly in wartime, the prevailing attitude towards the enemy remained one of hatred and resentment for all that the war had put people through. Yet there are some stories of interesting encounters between Australian and German soldiers which demonstrated the breaking down of barriers between enemies towards the end of the war:

In the big communications trench in Vaire Wood one party of about a dozen which was led by a German who laughed when one of the diggers said to him, "Finis le Guerre."
"Yes," he replied, "my _____ oath!" He said he learned the English language on the Boulder mine in Western Australia, and had been called back to Fatherland early in 1914."
- Private Ernest Morton, 2nd Machine Gun Battalion, 1918

In another example, Private Roy Hankin, 12th Battalion, was shot in the spine at Bullecourt. He fell next to a wounded German soldier, who gave him a one Mark banknote as a gesture of goodwill.

On the night of the 8 August advance, Gunner J.R. Armitage saw

a man, and in the bright moonlight, I could see his face. I nearly shot him but, as he seemed to be making very painful progress and was staring down at me as he crawled towards me, I finally went towards him. He let out a croak and called "Not shoot, not kill me". When I ventured closer, I found a badly wounded German. He had a leg almost blown off and a bad wound in the side. I got help and we dressed his side but could not do anything about his leg. At first he was certain he was going to be shot. We managed to reassure him ... he had been wounded in our advance and had lain in a thicket all night afraid to come out until pain forced him to. The dope we gave him eased his pain a bit and among other things he gratefully forced on me was a 2nd class order of Iron Cross.

The wounded German was eventually killed by his own side, when they bombed an Allied casualty dressing station the next day.

The German soldiers feared and respected the skills of the Australians. In a letter captured and translated by the 7th Australian Infantry Brigade in May 1918, a German soldier wrote to his mother:

We are here near ALBERT, I am in the foremost line, about 200 metres opposite the British. We have Australians in front of us here, they are very quick and cunning. They creep up in the night like cats to our trenches so that we don't notice them. Last night they were in our trench and killed two men and dragged one away with them. 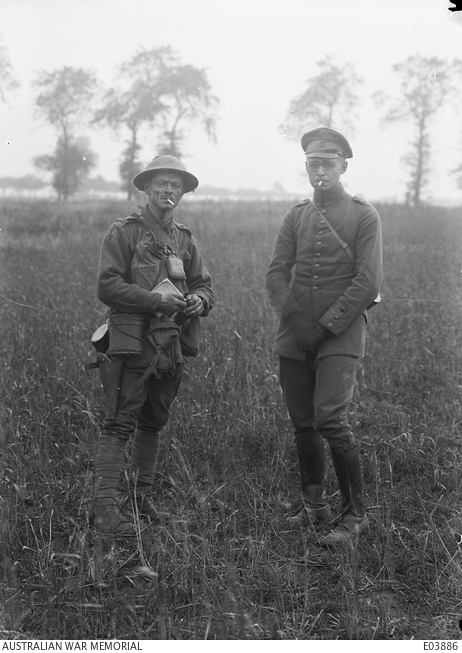 A German officer and his Australian captor, who had been twice wounded in the face, near the village of Bayonvillers, France, 9 August, 1918. 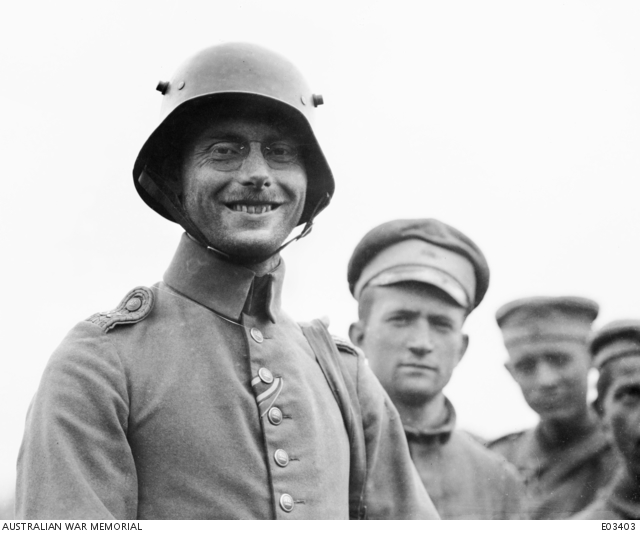 German prisoners of war, captured during the Allies' struggle to break the Hindenburg Line. This photograph was taken at Hagicourt, France, on 1 October, 1918. 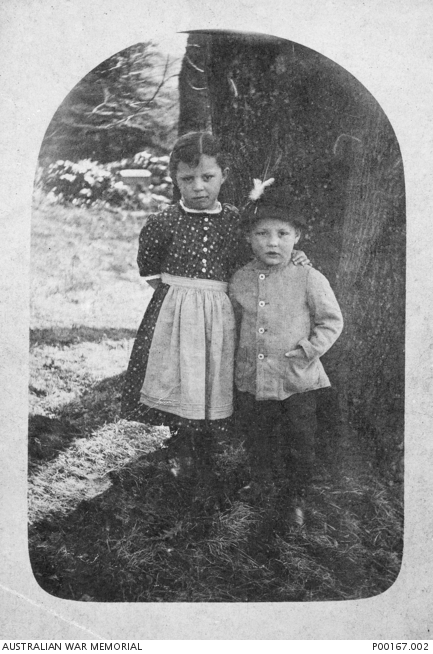 Two German children, whose father was a member of the German army, captured in the Battle of Amiens. Part of the inscription on the back of this image written by an Australian soldier reads: "A souvenir like this I think helps us to remember that there is another side to war."

Your Turn Next!, by Norman Lindsay. Drawing in the Bulletin, November 8, 1917.