The troops who had perhaps the most important impact on 1918 were those from the United States. The US entered the war in late 1917 and played a key part in operations and battles during 1918, such as the battle at Hamel with Australian troops. There was a feeling that the American troops were "green", and that often the more experienced Australian troops were the ones to bring the Americans up to battle standard. One such American soldier was Harry S. Truman, who later became a US president.

At the beginning of the year, as more US troops started to arrive destined for the Western Front, Gunner J.R. Armitage recalled his first impressions:

We amused ourselves watching a lot of very brand new looking Yanks arriving with their extraordinary-looking equipment. Some of the officers carried leather suitcases and umbrellas and looked more like commercial travellers than soldiers.

However, the Americans, nicknamed "Sammy" (a reference to Uncle Sam) or "doughboys" as they were also called, soon gained the respect of the Australians. In July 1918, Private Ronald Simpson noted that

by the way the Yanks shape up they are going to be good fighters, they think the world of the Aussies we mostly have a few of their N.C.O. in the line with us learning the ropes. They reckon with the Brothers on one side that's us and the cousins on the other that's Canadians ... we will just about win they are a fine body of men.

In early 1918, the following poem was published in the AIF magazine Aussie:

FROM AUSSIE TO SAMMY
Say, how do, old cobber, give us yer mit!
Pleased to meet you I certainly am.
We can now pull together in doing our bit,
Said the Aussies to proud Uncle Sam.
We've both got some stars on our banners, you know,
And I guess that our blood's the same hue,
And the old Southern Cross shining under below
Sends a warm greeting ray out to you.
We are absolute glad that you've joined in the fray,
And have jerried to Fritz's true light.
You can rest quite assured- on the odds I will lay-
Now he's up against something to fight.
We've seen lots of scrapping these three years or more,
And we've stoushed him- yes time after time-
And with your mighty help I guess he'll feel sore
When he's knocked back to hell o'er the Rhine.
So when you hop over the trenches with us,
Pay no heed to his "Kamerad" mania,
But get into him with yer bayonet, the cuss,
And remember the sunk "Lusitania!"
You can never forgive such a treacherous hound-
Giving that name insults any dog-
And a ripe lasting friendship square dinkum we'll found
When we've passed through the war's grimy fog.
- John T. Barrat

The American army magazine Stars and Stripes printed the following:

THE DIGGERS
Most Australians have been out since 1914, going through the hell of the Dardanelles and later being transported to France, where they earned the right, if ever soldiers did, to wear that natty bonnet of theirs at such a cocky angle.
Without exception, the Aussies all hope to be sent home "by the other way so that we can see America". We hope they will be sent home that way if they want to. Besides wishing to have them see America- which we are pardonably proud of - we should like to have America see them. 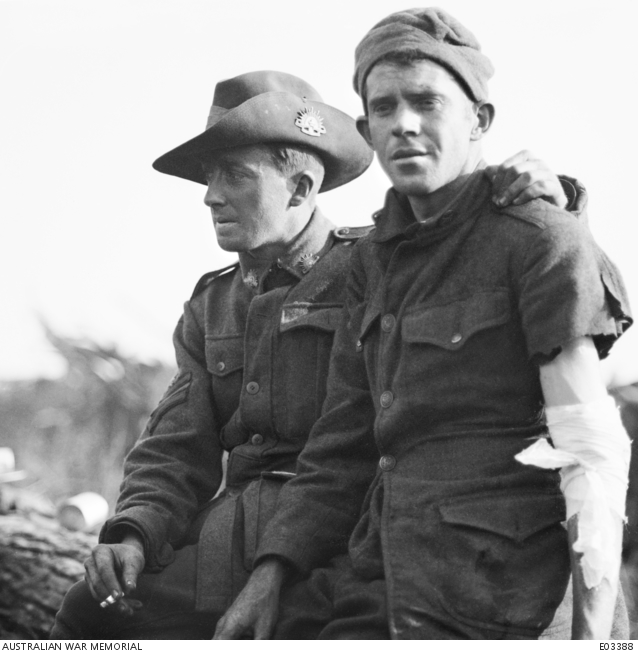 A wounded American soldier, being supported by an Australian, 30 September, 1918 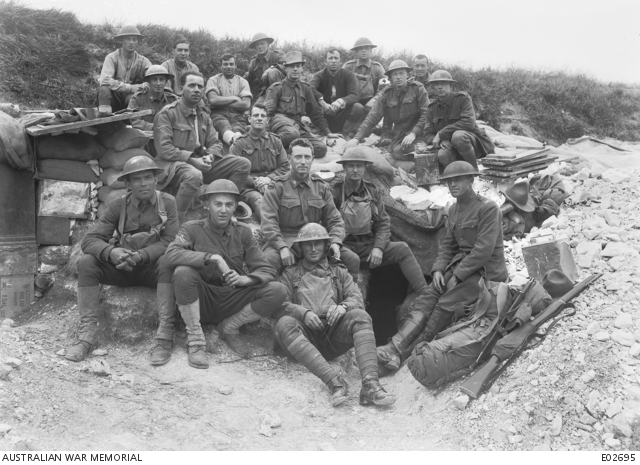 Australian and American troops together at Villers-Bretonneux, July 1918

A cartoon by Norman Lindsay in the Bulletin, 31 January 1918, showing the arrival of the Americans into the war. "Sammy" was a nickname for the Americans, derived from the term "Uncle Sam".

Caption Reads: "Crowd in Sammy, there's not time to lose"