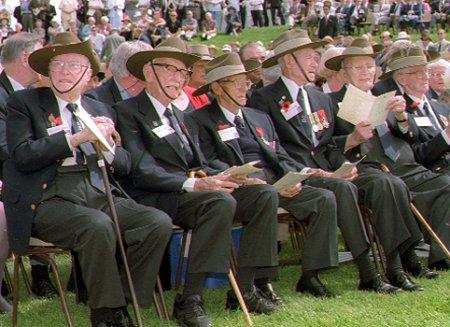 A group of First World War veterans at the Australian War Memorial on Remembrance Day, 11 November, 1998.

Australian Veterans of the war formed many different ex-service associations, and were never more visible than each Anzac Day when they marched wearing medals, behind their unit banners. Today, 80 years after the end of the war, only a few Australian men remain who served, survivors of a proud but torn generation.

In early 1998, a farmer ploughing his field at Pozieres uncovered the remains of private Russell Bosisto of the 27th Battalion, 82 years after he had been listed as missing in the fighting of 4 August 1916.

When Bosisto was buried with full military honours on 5 July 1998 at Courcelette British War Cemetery he was farewelled by Howard Pope, a fellow member of the 27th Battalion, as well as two of his nieces, Joyce Godson and Gwen Pascoe.

The previous day, Pope, along with Ted Smout, Eric Abraham and Charlie Mance had each been awarded the Legion of Honour by French President Jacques Chirac. They were the first of the remaining veterans world-wide to be honoured with this award, a recognition of the friendship and respect that still endures between France and her old Allies.

For the French, our shared history remains deeply mingled in the soil of their land. They remember that, in 1918, on a small stretch of the Somme, Australians were true to the words of a nameless soldier- Fini retreat, Madame.