1918 began badly. The terrible Passchendaele fighting had left the Australians exhausted and under strength. With few new volunteers, reinforcements were hard to come by. The divisions were under strain, but it was clear there were still many more battles to fight. Victory would come before year’s end, but the Australian Corps’s most important role still lay ahead.

Early on, the Australians faced the great German spring offensives. At Dernancourt they withstood the heaviest attack ever made on them, and at Villers-Bretonneux their bayonet charge repelled the Germans within sight of  Amiens. On 4 July,  under Sir John Monash, they went on the offensive with a well planned and executed attack at Le Hamel. Then came the great victory of 8 August. Further success followed when they captured the fortified hill of Mount St Quentin in early September, then broke the Hindenburg Line four weeks later.

The year’s actions left the Australian force near exhaustion, having suffered appalling losses . But the will of a nation spurred them toward victory as proud of their success, as were the diggers themselves.

The exhibition features key personalities and battles, and draws on the Memorial’s unique collections. On display are original maps, outstanding photographs, and remarkable works of art, some never displayed before.  Other treasures include medals awarded to Monash and Lord Birdwood, an 18-pounder field gun, and an exposed portion of a British Mark IV tank. 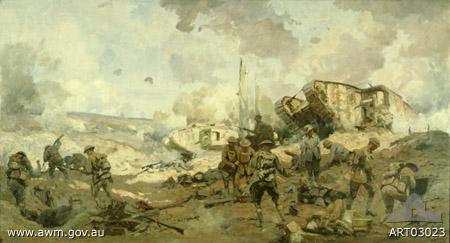