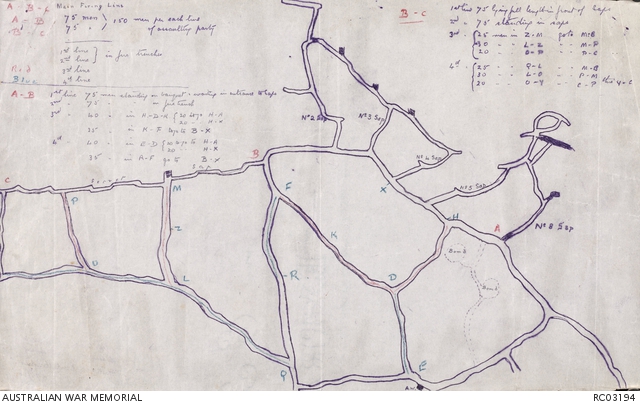 This plan shows the trenches at Walker ’s Ridge, which faced the Turkish trenches at the Nek, on the morning of 7 August 1915. It shows the forming-up positions of the 3rd Light Horse Brigade before the famous and ill-fated charge against the Turkish forces. Trench positions are marked by letters, and the positions for the forming-up are given by these letters. One position, “Y”, is not shown on the map; however, based on the details on the plan, “Y” was located on the far left, south of position “C”.

This plan is referred to in Operation Order No. 1, in the Scheme and Detail of Attack. It details the order of the attack and includes the objectives of each of the four lines. The firing trench (from which the attacks were made) was made up of two distinct areas. The area labelled A to B on the right was known to the Turks. However, the Turks were unaware of the “secret sap”, located at the area labelled B to C which was hidden from view. Half of the attacking force was to attack from the secret sap and half from the right.

The trenches on the right were deep and contained 75 men from the first line, standing on the firestep and at the entrances to the saps, and 75 men from the second line, standing behind them. The terrain in front was relatively flat. The secret sap could not accommodate 150 men, so the first line had to crawl out of the sap and lie in front of it. They were protected from view by the ground which rose up from the sap. The second line crouched behind them in the secret sap.

The third and fourth lines were spread throughout the support trenches. They had also been divided in half; one half of each line was to attack from the secret sap, the other half from the right. Once the first line had attacked, the second line was to move into their positions, and the third line to the firing line behind the second line. Once the second line attacked, the third line would move forward and the fourth line would move into position behind them in the firing line.