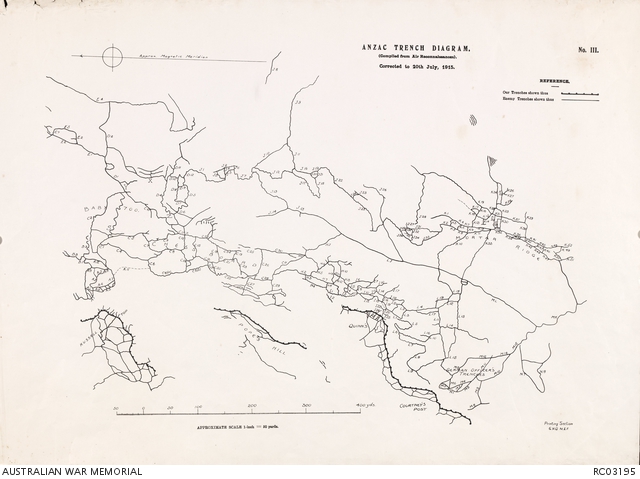 This map covers the area from Russell’s Top to Mortar Ridge, including Pope’s Hill, Baby 700, German Officer’s Trench and Quinn’s Post. It was compiled from air reconnaissances up to 20 July and shows the British front line and some communication trenches, as well as more extensive coverage of the Turkish trenches. It was printed by the Printing Section, General Headquarters, Mediterranean Expeditionary Force, located at Imbros.

A copy of the Anzac Trench Diagram No. III map was used to plan the attack on the Turkish positions at the Nek. The map is referred to in the Scheme and Detail of Attack in Operation Order No. 1. The Scheme and detail of Attack lists the objectives of each of the four lines attacking the Nek. On the map, the Turkish trenches are identified by letters and numbers, and these numbers are also given in the Operation Order. The trenches the 3rd Light Horse Brigade was to capture were up towards Baby 700 and across to the left of the Chessboard, a heavily entrenched Turkish position. Other parts of the Chessboard were to be captured by part of the 1st Light Horse Brigade.

Unfortunately for the 3rd Light Horse Brigade, the majority of the men who attacked the Nek were killed or wounded within a few paces from their front line. Only three men are known to have reached the Turkish front line, and they did not succeed in penetrating further. Through representations of the charge in the media – particularly in the 1981 film, Gallipoli — the charge at the Nek is regarded by many as one of the greatest tragedies to befall the Australian Imperial Force in the First World War.