The Holocaust: Witnesses and Survivors

The Holocaust: Witnesses and Survivors

The Holocaust reveals the extremes of humanity’s capacity for evil, as well as its spirit of endurance and survival. This exhibition represents the Holocaust through the experiences of some of the survivors who made new lives in post-war Australia, as well as those of Australian official war artist Alan Moore, who accompanied British troops as they liberated the Bergen-Belsen concentration camp in Germany.

The day that I entered Belsen I didn’t expect anything like it. I forgot about doing anything that the army told me that I had to do … I just went quite crazy, I wanted to try and put everything down as well as I could … drawing madly all the time. I wanted to show what it was, what was going on. 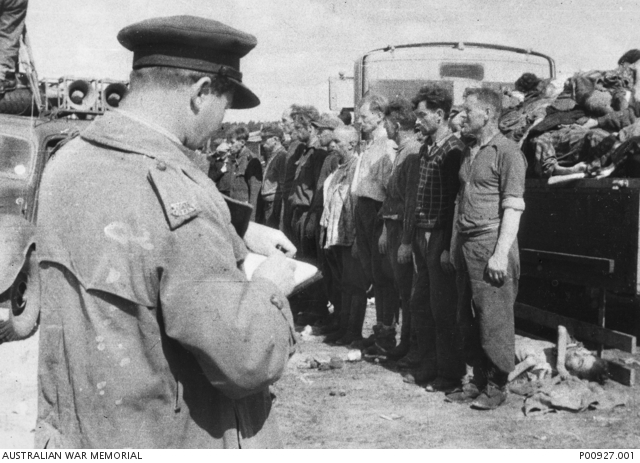 Official war artist Alan Moore sketches captured SS guards at Bergen-Belsen concentration camp. The truck behind the men contains the victims of prisoners from the camp. 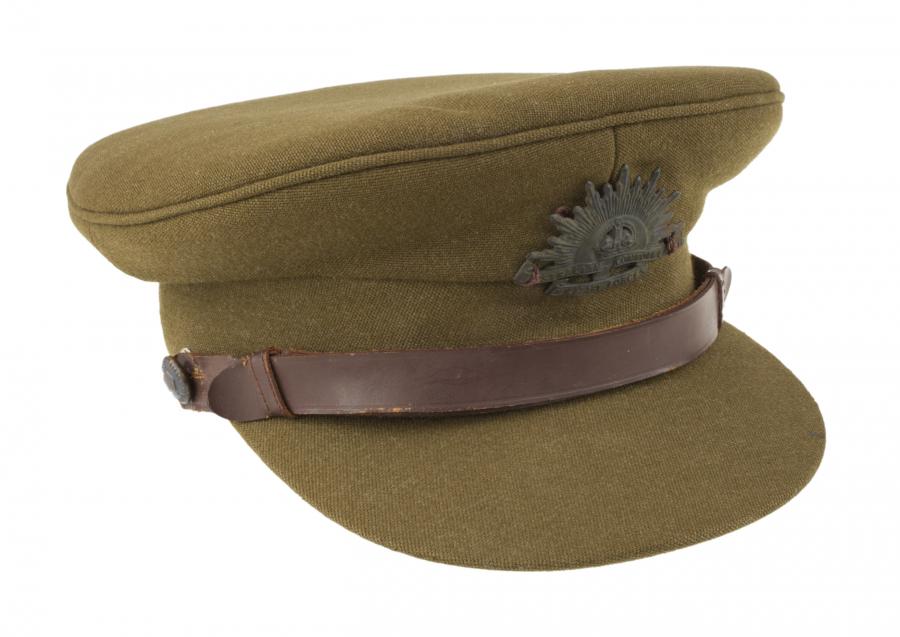 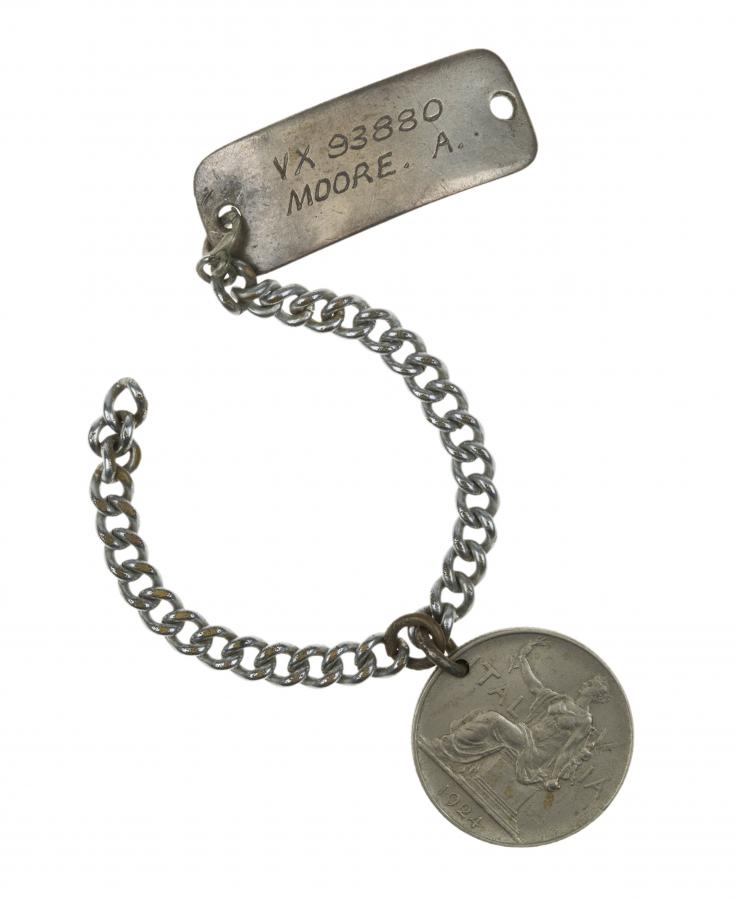 Identity bracelet worn by Lieutenant Alan Moore, inscribed with his name, rank, service number, and status as an official war artist. The 1924 one lira coin was probably attached in 1944 or 1945, when Moore was covering RAAF squadrons in Italy. Moore was probably wearing this bracelet at the liberation of Belsen.
Donated by Mrs Alison Moore in memory of Alan Moore 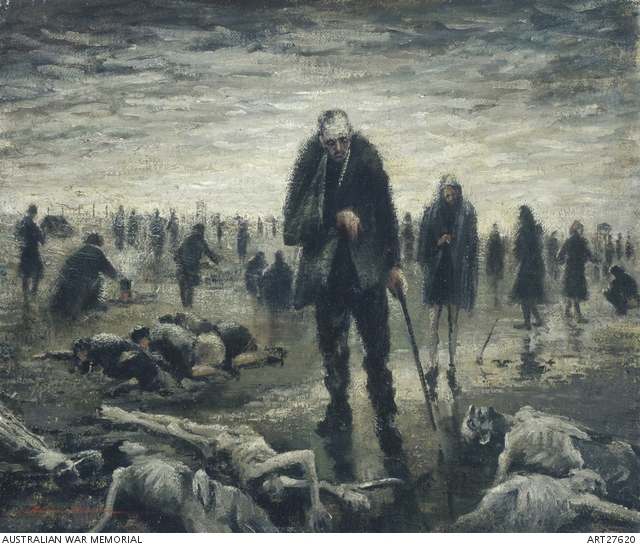 Within hours of Alan Moore’s arrival at Belsen, another two Australians entered the camp and bore witness to its horrors: BBC war correspondent Chester Wilmot and RAAF Public Relations photographer Cyril Issac. Both used their trades to reveal the horrors of the first concentration camp liberated by British forces, and their images and words reverberated across the world.

In the aftermath of the liberation of Belsen, medical units streamed into the camp to assist 40,000 inmates, many of whom were close to death. Australian Red Cross officer John Nimmo, who was in charge of the distribution of Red Cross supplies to Allied prisoners of war in Europe, toured the camp and later remembered:

My first reaction on entering the Camp was one of over-whelming revulsion on observing the depth to which so called civilised and cultured people could descend in their treatment of their fellow human beings, most of whom were of their own nationality. 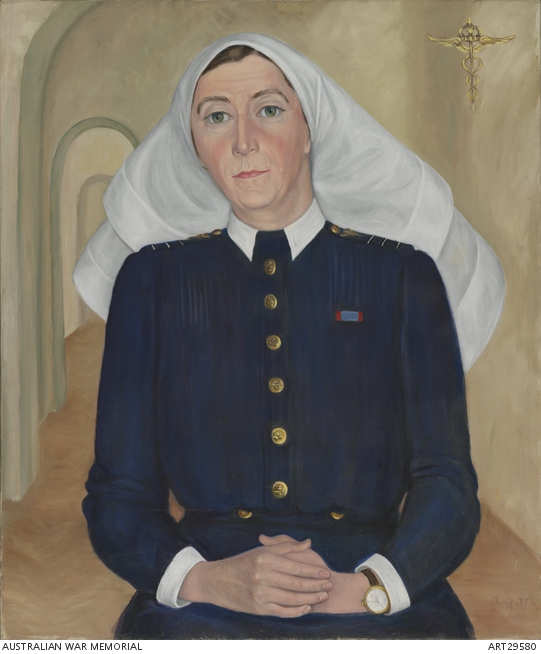 Australian Matron Muriel Doherty, a member of United Nations Relief and Rehabilitation Administration (UNRRA) arrived at Belsen in July 1945. She was instrumental in the care of survivors who remained dangerously ill months after the liberation.  She wrote, “UNRRA’s work now is to transform an acute emergency & improvised Hospital into a well organised, hygienic institution and I am in my element.”

As the months passed, the death rate of former inmates lowered, and many left the camp to rebuild their lives.

Henryka Shaw (née Schermant) survived five concentration camps, including Plaszow, Belsen and Auschwitz. She later emigrated to Australia, married and established a new life. As Henryka’s family grew, she wrote, “I realised that I want my grandchildren to know my story. Above all, I think people should know these things because maybe that will help stem the development of hatred among people.” 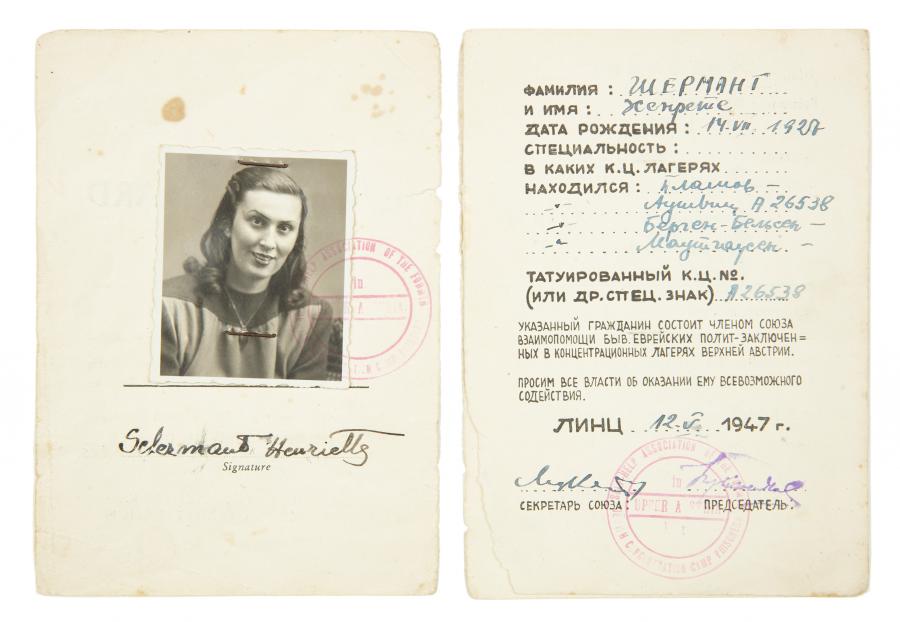 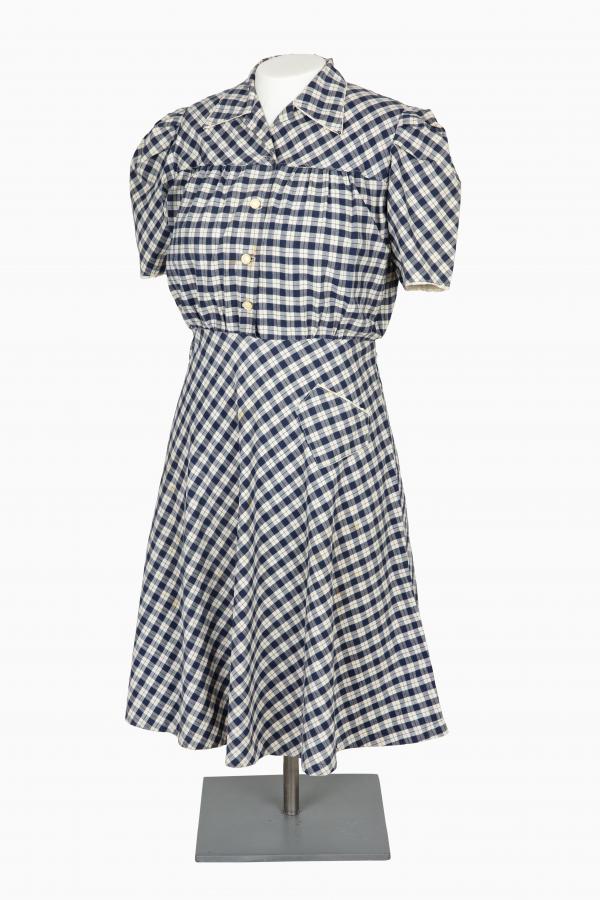 When Henryka was liberated she was in the Mauthausen concentration camp infirmary, gravely ill with typhus. Her clothes had been discarded because they were infested with lice, and she had only a bed sheet.  This dress is believed to have been made for Henryka by fellow camp inmates in the days after the American liberation of the camp in May 1945. The dress was likely made from fabric scrounged from the SS guard barracks.

The Holocaust: witnesses and survivors is located in the Second World War Gallery on the ground level.