If I look back, the thing I loved most was the esprit de corp and the camaraderie and the mateship.

Chris had been a number of years in the army before his first overseas deployment in 2007.  He’s still proud of his work with a small and specialised unit within Training Team Iraq, mentoring Iraqi soldiers in logistic system skills, such as how to run a warehouse, and how to catalogue, label and pack hundreds of weapons designated for destruction, captured during both the Iraq wars. It was challenging work, as Chris recalls:

They’re from a totally different culture, these guys.  They’re born in war. That’s all they know. They  were just like sponges and wanted to learn things, but they literally had nothing, no equipment, no training. The warehouses they did have were knackered (by warfare), and the Iraqi guys were crawling through the rubble, trying to work out what was serviceable, and what wasn’t covered in pigeon crap or full of scorpions.

Many people would think this the lesser of two challenges, when faced with the daily threat posed by rockets and explosives in the area.  Chris explains that often, the missiles weren’t even being aimed at the Australians, but the threat was ever constant.

We got hit a lot. Our building wasn’t all that far from the back of Route Irish, the most dangerous road in the world.  At one stage a Humvee got hit by an IED and parts of it, and its occupants, landed in our area… There was a lot of death, a lot of horrible things. And that’s war… You get used to it.

Chris recounts an event both comical and terrifying: the sudden realisation that there had been a sniper in a tree, overlooking his compound, for at least a week.

I call interpreter over and go, “What’s he doing, why haven’t we been shot yet?”

The interpreter explained that the sniper was merely curious about the Australians and their (to Iraqi eyes), unusual camouflage uniforms or “desert cams” as they are known, which were very different to the uniforms worn by other Western forces in Iraq.

When you sit back and think about it, you actually have a laugh about it. ‘Oh. Is that a sniper?’ Well, “dur”. If they said “dur” in Arabic - I don’t know what that is!

Chris’ tattoo is a direct result of obtaining a ticket to attend the Centenary of Anzac at Gallipoli, which he attended with a soldier mate, an experience both emotional and in Chris’ own words, magnificent.

I had my feet in the water, where it was actually registered as the landing place of the very first boat, and I dug my fingers into the gravel and I cried. Sitting there touching the same gravel and water as a 100 years ago, and it just took you… You can’t do it justice. You literally can’t.

The experience was so powerful, Chris needed to commemorate it with a tattoo, despite never having had a tattoo before.

I don’t know why, I don’t know what it was, but I wanted that tattoo. I found a tattoo shop, send the design in – right, spot on – ok, here we go. I felt sick, I went in, my ears were tingling, I’m  such a wuss – took four years – but I got it and I’m really proud of it. 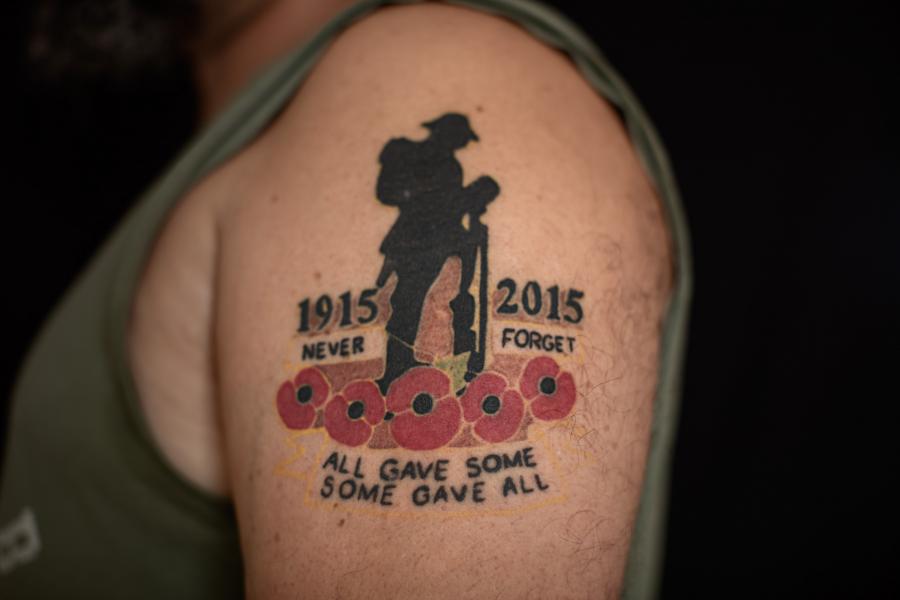